- By A Friend in Sarajevo 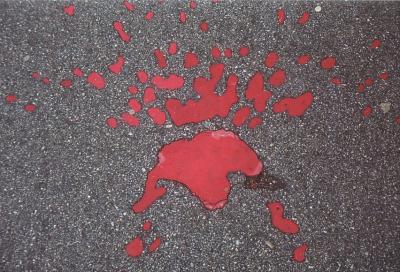 (Photo: A "Sarajevo Rose," turned into an ersatz war memorial.)

I’ve been thinking what to write since last night and I keep drawing a blank. Mostly because I figure you already know whatever I might end up saying. Also, cognitive dissonance, I think. The impossible becomes possible, then it becomes actual, but still somehow remains inconceivable. Also, sensory overload from all the news, the images: the dude in the chewbacca bikini, the dude carrying out the dais, waving to the camera with a picture postcard smile and a ridiculous pom-pom hat like he’s going cross-country skiing, so childish, so lovably American, so out of touch with reality… I think we’ve been taking reality for granted.

And then there’s my own baggage. I can’t help but think back to April 5, 1992, the start of the undoing of our reality, in retrospect, our comeuppance for having taken that reality for granted, for being wilfully, stubbornly blind in the face of mounting evidence that things were not at all how we would like them to be.

I still don’t really know what to say, maybe just that I get it, but I don’t, I still don’t, even after all this time, having lived through it, it’s still inconceivable even as I live it.

My eldest has been doing WW1 in school, we made him read that Yeats poem, the widening gyre, the centre cannot hold… What happens on inauguration day? What happens four years from now? Am I just being alarmist? Is this just a hiccup, the last tantrum of a narcissist fighting his losing battle? Or is it just the beginning, the death throes of a rough beast about to give birth to something even worse?

How are you holding up?