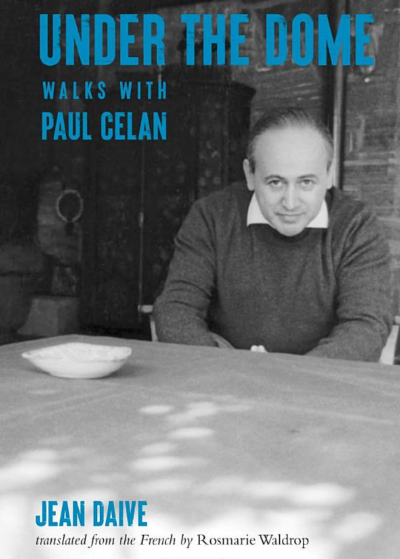 Under the Dome: Walks with Paul Celan by Jean Daive, Translated by Rosmarie Waldrop (City Lights, 2020)

On or around the 20th of April, 1970, Paul Celan walked from his apartment on Avenue Emile-Zola to the Pont Mirabeau and stepped from the bridge into the Seine, from which he did not emerge alive. Celan’s suicide resonated throughout the European literary world: yet another among the seemingly countless casualties of the Holocaust, of the Nazi labor camps and death camps, after Celan had been imprisoned in the former and his parents murdered in the latter. For the French poet, Jean Daive, Celan’s disappearance continues, like the chestnut trees, to shadow streets around the École Normale Supérieur where Celan taught German, or like the paulownia trees around the Place de la Contrescarpe where the two poets took long walks together. Over and over, in Under the Dome, Daive returns to the refrain: “Paul Celan has disappeared.” But while Celan has bodily disappeared from the life of his younger friend, translator, and fellow poet, he remains a profoundly present absence in Daive’s fragmentary and elliptical recollections of their work and walks together.

Born Paul Anschel in the then Romanian, now Ukrainian, city of Czernowicz/Chernivtsi in 1920, Celan was one of the central European (and world) poets of the twentieth century’s second act. Together with Ingeborg Bachmann (his one-time romantic partner) and Nelly Sachs (a friend), he forced German-language poetry to confront the evils perpetrated by German-speaking nations and societies in the 1930s and 1940s. Like Bachmann and Sachs, he wrote both from and against Theodor Adorno’s famous proclamation in “Culture Critique and Society” that “to write poetry after Auschwitz is barbaric.” Where some poets might have resisted or refined Adorno’s adjective with a reminder that, as Walter Benjamin just as famously averred, every document of civilization is at the same time a document of barbarism, Celan took up the adjective as both truth and challenge. “Barbarism” derives from the Greek term for those who could not speak Greek (the language of civilization), those whose language—meaningless streams of syllables like bar-bar-bar—testified to their roughness and rusticity. Only in such language, Celan demonstrates, utterance stripped of its patina and pretense of civilization, could the truths of Auschwitz and the Holocaust be registered His mission with respect to German produced poems that are broken, sharp-edged, filled with cryptic references and neologisms, poems in which the language is deformed, sometimes almost destroyed, so that it might be cleansed and made to bear oblique and fragmentary witness.

In Daive, who met Celan in 1965, Celan found a sympathetic poetic partner. Daive, too, writes poems that turn on themselves and enact an urgent skepticism about reference and the possibility of meaning in the wake of historical trauma. When Daive showed Celan poems that made up part of his first book, White Decimal (Décimale blanche), the older poet responded with the assertion that he would translate Daive’s poems. Celan made good on the promise, producing the German translation of White Decimal. At the same time, Daive worked with Celan on French translations of Celan’s work. Their conversations about translation, poetry, and language make up one strand of the memories presented and meditated upon in Under the Dome.

To be clear, the conversations are not reported in the familiar format of the interview, ubiquitous now as one branch of the contemporary poetry business. Rather, the exchanges of ideas here work something like the poems of Celan and Daive. Jammed between a reference to Celan’s funeral and a memory of Celan walking, looking at the ground, Daive worries a word (Windgalle) they’re working with at elliptical and illustrative length:

All the words are composites. The second term always the most important. The verb is tied to the second term. There is a vertical sense.
Paul Celan chews a word like a stone. All day long. It produces word energy. It all goes into the energy of his composite words. Here we have his biography.
Paul Celan invites the reader to travel inside the word (voyage, labyrinth).
On the one hand, the composite noun—on the other, no verb is given. Paul Celan does not give the verb.
Morphology.
Paul Celan’s joy on discovering a word. Windgalle. He burrows into words.
Is there somebody in the word?
The word is no more. The world is no more (stronger).
I have to carry you.
Absence of the verb: the verb is absorbed into the energy of the composite noun.
Morphology.

Memorize these lines. One could replace the entire curriculum of poetry writing courses with this passage. Here is the poet’s responsibility, the enormous difficulty of the thing done right, the necessity of keen attention to the medium’s elements, and the occasional burst of joy—consequent not on a moment of self-revelation but instead, crucially, on “discovering a word.”

This strand of talk about language, poetry, and translation is joined by strands of Celan and Daive moving through the streets and squares of Paris. Specific locations recur: Celan’s apartment; his office at the École; the apartment at which Daive visits Celan’s widow, Gisèle Lestrange; Le Chope, the restaurant where the two frequently lunch; Place de la Contrescarpe, that raffish hangout near the top of Montparnasse; the Seine. Repeated in different discursive contexts, these spaces become poetic fragments, discovered words, saturated with the poets’ habituation, signifiers of the absence that Daive cannot comprehend:

The village of the Contrescarpe dries in the sun and still hides old paths that stop abruptly at certain palisades. The empty lots are forgotten prayers.

More than this, though, Paris in Daive’s account is at once a place for walking (“Walking can make the change of place euphoric. A step. A step and another step. A step. I walk. I go on.”) and a site of structures—“Autumn made of cranes and cables: geometric tunes around the sky”—and signifiers available for incorporation. Sometimes the latter are words (Celan enjoys a van-mounted placard for Lesieur Oil); often, they are objects plumbed for metaphorical significance. Chestnuts, for example, recur, both the trees beneath which the two poets walk and the nuts which, roasted, they smell and share and which, falling, they contemplate:

Chestnuts bounce, roll at our feet: nature drops out of autumn. Mild wind.
— One has to go through life with a rasp, he says.
The falling chestnuts hit the ground with a dry sound. Detonations. Nature massed in the air turns over and rolls like bursts of a meteor.
— So it is possible that the earth delimits the infinite of language . . .

The walks enable intimacy, words exchanged while the poets are side by side rather than face to face. Their work at the long table in Celan’s apartment or at his office similarly allows each to reveal to the other as the attention of both is fixed on the words before them.

And there is, strangely, at least at first, a strand of laundry. Daive comes upon Celan washing his underwear in the bathroom. This is the man, the exile, the survivor. Clothes washing slips quickly to other kinds of cleansing, though. Celan talks of using newspapers to scrub a gravestone. “Text for the dead,” he says. “Text and death.” “Under the sign of cleaning.” Daive remembers a conversation with an Austrian girlfriend. He is reading Francis Ponge, whose work, he says, cleans the language. Oh, Grete exclaims. We have a poet who cleans the language, too. Paul Celan.

A third figure is present on the poets’ Parisian walks, largely invisible. Rosmarie Waldrop, herself a renowned poet, is an accomplished translator. (She has almost single-handedly made available to English-language readers the oeuvre of Edmond Jabès, and she has translated Celan’s prose.) Here, translating conversations about translating, Waldrop captures not only the nuances of Daive’s French, but also, crucially, the complexities with which Celan’s German moves across linguistic and historical borders. That she does so without ever making the reader think explicitly about her translation (without, that is, distracting from the substance of Daive’s and Celan’s discussions and meditations) is evidence of mastery. Waldrop’s work here is like expert stitching on the back of a tapestry, the precise mortise built into the inner workings of a desk. It is invisible, but without it the beauty and smooth functioning of the piece could not exist.

For readers familiar with the work of Celan, Daive, or both, Under the Dome is a brilliant and heartbreaking evocation of both poets’ projects with respect to language, history, and poetry, and of the irreparable trauma at the heart of history’s bloodiest century. For readers lacking this familiarity, the book might well draw them in. Celan here is at once trapped in the shadows and capable of humor, generosity, and care. Daive is vulnerable, curious, and grief-stricken. Their conversations are smart, sophisticated, sometimes halting, and, especially in their elliptical references to facts of biography and history, compelling. Paris in this book, as in so many, is a character itself, or, better, a text worthy of these two poets’ hermeneutic labors. If I were ordering gifts for friends right now, I could imagine a nice bundle in which this volume came along with Norma Cole’s translation of White Decimal and John Felstiner’s translations of Celan’s poems. In the dark times, one could do worse than have the company of these two poets while walking through the shadows.