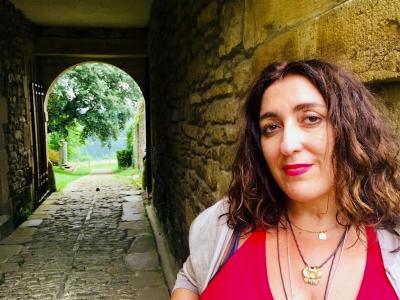 I want to tell you an unlikely story. I'd find it hard to believe if it hadn't happened to me, so I'll understand if you choose to take it with a pinch of salt. I assure you, however, that every word you're about to read is true. I hope you'll be able to take what you need for your own life from this tale.
—from "Bele & Zozo," Volume 62, Issue 1 (Spring 2021)

Tell us about one of the first pieces you wrote.
A few years ago I found a school binder with a story I (aged 7) had no recollection of penning. It was the story of a girl who went to a funeral where everybody in attendance died “of pity and sorrow” except her. Then, at the funerals of all those people who had died in the first funeral, people in attendance also died “of pity and sorrow.” This girl always survived these deadly funerals (she attended several, the same thing happened over and over). Eventually she found herself alone in the world, puzzled, walking through innumerable empty towns and cities wondering why everyone but her had died, why she was immortal. I’m not sure what this says about my 7 year-old psyche, but there you go.

Beyond that curio, the first pieces I remember feeling very accomplished about were a series of short stories that I wrote for my fishing village’s tiny radio station, Itsuki Irratia, about the trials and tribulations of Carmen Tuna, a mad heiress to a tuna tinning emporium who shape-shifted into a tuna in moments of great distress. I was 17 at the time. The program aired on Wednesdays, from midnight to 3am, so I suspect our audience was quite limited. Never mind: it was terribly exciting. The friends who did the radio program were 10 years older than me, and having them validate my writing week after week was incredible. There was something about hearing my words read by someone else, with headphones and in secret, while my parents—oblivious to my radio shenanigans—thought me asleep. It gave me a sense of some sort of secret superpower.

What writer(s) or works have influenced the way you write now?
It’s hard to say but I think that, in terms of structuring my writing, the Basque authors Bernardo Atxaga and Joseba Sarrionaindia were the first to give me a sense of the possibilities of hybridization. The sense that because we are Basque and writing into a very strange tradition—old language, young written literature, huge oral catalog—we just have to make things up as we go along. We have to write anything and everything because we’re building up a tradition. Axel Munthe’s The Story of San Michele was another key literary encounter for me, that rich mix of memoir, fantasy (is it fantasy though?) and travelogue. And then Jane Bowles, her crazy characters, her deadly style, her pace—so refreshing. Ngūgi Wa Thiong’o has done a lot for my consciousness; Decolonising the Mind put order into my disordered, puzzled, colonized mind. I understood myself through his works, I knew what he was talking about; he inspired in me the urge to write about some of those same things myself. And of all the authors I’ve translated, I’d say the biggest influence in me has been Miren Agur Meabe; how she writes about the plight of the female artist, the struggle just to become one.  And the presence of the sea life in her work. That too.

What other professions have you worked in?
Before I started variously teaching Euskara, Spanish, English Literature and Creative Writing in several higher education institutions in the UK and the US, I ran backpackers hostels in Ireland for four years, in the summers, as I worked toward my BA in English and Irish Literature. I was a chef for a summer in a restaurant in the middle of an animal reserve in the Basque Country. (It’s wonderful to have a family of mouflons for neighbors!) I lived and worked at the reserve, and inevitably had to chase after the otters every time they escaped their enclosure (which was often), and joined the wolves when they howled at the full moon. I helped birth deer and wild boar, and became addicted to the magic of owls waking up at dusk—hidden between the trees, their eyes would suddenly pop open and stare right at you. It never got old. That was the best summer ever. I’m also a professional singer, and have performed in all sorts of places: elegant theaters, posh venues, dive bars, rich people’s mansions, restaurants, Quaker churches, summer festivals, the NY subway, the middle of a field with an audience of cows. . . I’ve many stories to tell about my singing life.

What did you want to be when you were young?
I took a photography course when I was 14 and learnt to use a dark room. I was hooked. It made me love photography, and I remember wanting to be a photographer with all my heart back then—on top of being a writer, which had been a constant since childhood. I think my love of photography has made my writing more visual. I still love photography and video art, but haven’t had the chance to develop that muscle as much as I thought I would.

What inspired you to write this piece?
About 5 years ago I had an epiphany. I had to give a talk at the University of Chicago on Humanities Day, and because I’m a bit insolent perhaps, and don’t like—maybe intimidated by—the pompousness that comes with that kind of scene, I decided to do my talk on the art of flamenco and its representations in art and literature and to sing my way through it. I thought people would be horrified at the audacity of an academic performing a seguiriya (the beat of despair in flamenco) in the middle of a lecture, but I was mistaken. People loved it. They thought it was the best thing ever. I was totally shocked. I wanted them to feel, and—through their emotion—understand what I was talking about at a deeper level. I thought they wouldn’t understand me, but they did. That day I realized that I needed to bring all the different parts of myself into my writing: the academia, the translation, the music. That’s when these new manifestations of my writing started to happen. These pieces with everything in them.

Bele & Zozo is part of a longer project, a collection of hybrid memoir-essay-fiction-translation pieces around Basque authors. This particular piece is primarily inspired by my love and connection with animals and the natural world. I believe we’ve forgotten how to communicate with them, but we actually can. I think we did more fluently in the past but we’ve lost the habit. I found out that Bizenta Mogel—the author I introduce in this piece—thought so too, so I wanted to weave a story around that idea. She suffered a lot of misogyny in her life, as has practically every woman I know, so there was that element too. I wanted to reclaim Bizenta Mogel’s achievements and spirit, and empower us all in the process.

Is there a city or place, real or imagined, that influences your writing?
My hometown, certainly. A very quirky fishing village, the last stop on the train line. The fishing life, the sea. I carry the souls of my many fishing ancestors inside me, and long for a life at sea I never had. I obviously romanticize things, life at sea is very hard, but can’t help feeling that something is missing. In a way, I think my writing and translating is a sort of sea mapping, a permutation of the sea quest into written form.

Is there any specific music that aids you through the writing or editing process?
I like to listen to instrumental music while I’m editing. I can’t have voice or I get too distracted because I listen too hard to study every singer, can’t help it. It’ll be jazz or modern classical or experimental music, music that stimulates my brain. I usually write in silence, or listening to a recording of the sea, or birds, or cicadas.

Do you have any rituals or traditions that you do in order to write?
A steady flow of cups of tea and dark chocolate, mostly. I do some yoga and meditate a bit if I get stuck. Or do a tarot spread.

What are you working on currently?
I’m working on three literary translations: Unai Elorriaga’s Old Dogs, Old Bones for Archipelago Books, Miren Agur Meabe’s Burning Bones for Parthian, and an anthology of female Basque poets for Parthian too. I’m also writing this collection of hybrid memoir-essay-fiction-translation pieces around Basque authors, and what I call “a novel in flamenco form,” which is quite an undertaking. I need a publisher who will take on the challenge of a book that has a musical dimension, a publisher willing to work around the needs of not only their author, but also those of a recording engineer. Each chapter opens with a song—which I sing—and its translation. I’ve performed chapters of this book live and it works very, very well, but it will be a challenge to come up with a system of delivery for the songs within the book. I’m still trying to figure that one out.

What are you reading right now?
Marlon James’s The Book of Night Women. And Six Mi’kmaq Stories, retold by Ruth Holmes Whitehead.

AMAIA GABANTXO is a writer, singer and literary translator specialized in Basque literature—a pioneer in the field and its greatest contributor. She’s a multiple award recipient: a Wingate Scholar and OMI alumni, and a 2020-21 artist-in-residence at the CLEAR Maritime Lab in Newfoundland’s Memorial University. A descendant of seafaring folk, she has translated generational skills into an ability to chart new routes in the literary seas. She is a lecturer at the School of the Art Institute of Chicago. Her album Kantuz: 1931 was released last year.