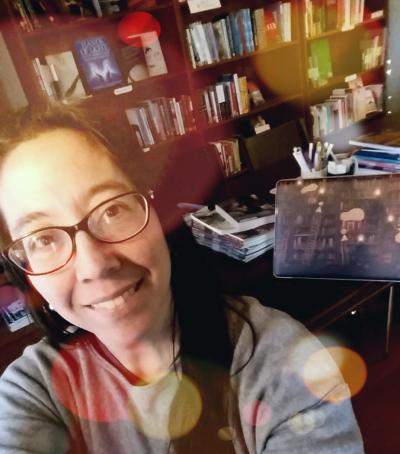 Above the pitted black coast, at the house that looks accidentally built, the floodlights have been left on. The owner is not there. He only comes during the winter, when the waves rise and he can pick his way down the cliff to ride the surf off the reef, some two hundred yards offshore. Now, in summertime, the ocean is sleepy under round, slow swells that gently slap the cliff.
—from “A Breath of Plankton Soup,” Volume 62, Issue 1 (Spring 2021)

Tell us about one of the first pieces you wrote.
The very first story I wrote, of which I was really proud, was about a Thanksgiving dinner involving woodland animals of the Hudson Valley (illustrated, of course). But if you want to fast-forward past that one, through the 8th grade mermaid story, and past the high school fan fiction (I refuse to name the band), I’ll mention “Rain,” a short-short I wrote as an undergraduate, a fictionalized homage to a girl who was one of my best friends in high school. We needed each other badly and we were always sad. Even now, the emotional vulnerabilities and bruises that drew us to each other for comfort are hard for me to articulate clearly. “Rain” was, I think, an attempt to illuminate this marvelous phenomenon, about how tacit, even unconscious pain draws humans together. Aside from thematic awareness, I recall working at craft for the first time when revising that piece for workshop—how things like the cadences of language, its simplicity or complexity, sentence length, tell the story as much as the images and the chronology of events. I don’t know whether it was a good story. I never tried to get it published, and I don’t recall the professor encouraging me to do so. Probably, in the end, it was heavy on syntactical flourishes, and lacking in image and chronological movement! But it was a milestone, my first grown-up story.

What writer(s) or works have influenced the way you write now?
Lauren Groff. (I wish I had the nerve to truly never muck around with quotation marks and italics to mark external and internal dialogue.) Also Toni Morrison. Both of them for the way they seem to naturally see, and matter-of-factly tell, about frightful and sobering truths behind the world’s various glamours. Sofia Samatar, for her virtuosity in creating fantastical settings that seem more real than the real world. Also, though, Tolkien’s Middle Earth. I wandered into it at nine years old and I never found my way out. (I’m probably not trying all that hard.) And as a writer of Filipinx descent, I’m really excited by Gina Apostol’s fiction. The breathlessness of her narration at times, along with the associative richness of the worlds she creates, feel both familiar and revelatory. I think she’s enhancing the American awareness of Filipinx identity in story in a way that’s long overdue.

What other professions have you worked in?
I’m trained as a lawyer, and still a member (nonpracticing) of the New York State Bar. I worked in intellectual property law for awhile. I also clerked for a litigation firm, which was scary and cool, and allows me to say that I wrote a brief for the U.S. Third Circuit Court of Appeals. Ultimately, though, the practice was not for me. Along with my husband, I’m a commercial property landlord, though that feels more like a confession than a profession. We ran a co-working space for awhile, but the pandemic made it impossible for us to host day-workers and to organize safe, fun events, so we put that to sleep.

What inspired you to write this piece?
The manta rays and the humbled men of the world. It seemed right for these oddities to co-exist in a story that loves them and celebrates their beauty.

Is there a city or place, real or imagined, that influences your writing?
Oh, my gosh! Every place, real and imagined, influences my writing! The fact that I’m a Tolkien fan, all on its own, reveals my enthusiasm for setting. Setting probably excites me the most. My default setting for “the City” is always New York City, but I need add-ons like the magnificent open markets of Ben Thanh in Ho Chi Minh City and La Boqueria in Barcelona; and like the season of protest I witnessed in Buenos Aires, with the grumpy airport traffic surging over grassy medians and roadside berms to circumvent the seemingly impassible road-blocks of burning tires. “Home” always begins with the Ramapo Hills, lots of trees, and a busy kitchen, but through their usual July haze, the Ramapo Hills can look remarkably like volcanic tropical islands; and depending on the setting, a truly busy kitchen might have to incorporate the pig spit from my grandparents’ yard, or a special medieval custard, made of blanched, pulped almonds and sugar water, for delicate constitutions. Right now, I’m writing about an imaginary island country that’s strongly influenced by Philippine geography and history, but departs from it in many ways, as I am unable to escape my American education and upbringing, as well as my urgent need to invent.

Is there any specific music that aids you through the writing or editing process?
No. Or rather, I never know when or where music is going to influence me. I don’t listen to music when I’m writing, but at all other times I’m either listening to music, singing, or struggling with earworms like “We Are Young” by Fun.

Do you have any rituals or traditions that you do in order to write?
The most important things are internal—to maintain a state of mind in which I’m enjoying myself, feeling good about a realistic writing schedule, and remaining positive when things don’t go according to plan. It’s impossible to measure the importance of hidden privileges, like regular meals and bedtimes, and reliable companionship that allows me to thrive as a human being. Those are the real indoor plumbing of my writing life. I also allow myself the indulgence of the right notebooks and pens (gel pens, in at least three colors), and the crutch of scratch paper for recording reminders. The scratch paper is vital, because nothing distracts me more than remembering the little things. If I sit down to write at 10am, and I remember I need to call the vet, it’s almost impossible for me to convince myself the phone call can wait til 2pm if I don’t write down, on paper, “2pm—Call vet.” Only then can I focus.

Who typically gets the first read of your work?
That would be the hubbo.

What are you working on currently?
A novel. I waver between calling it historical fantasy and a fantastical family epic.

What are you reading right now?
Hide in Place by Emilya Naymark, The Mighty Oak by Jeff W. Bens, and How to Dispatch a Human: Stories and Suggestions by Stephanie Andrea Allen.

DONNA LEE MIELE lives and writes in New York’s Hudson Valley. Her fiction has appeared or is forthcoming in Ms. Aligned 3, Atticus Review, Red Fez, North Dakota Quarterly, and elsewhere. She is a founding member of River River Writers’ Circle.