Intersectional Voices for a New Generation: How A New Young Adult Anthology in Verse Continues a Conversation Started Decades Ago 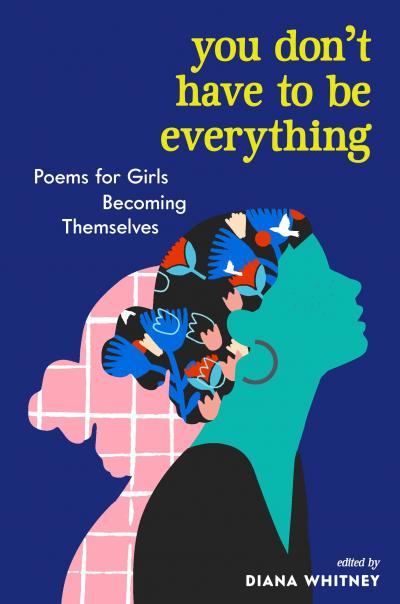 "The very act of writing then, conjuring/coming to ‘see’, what has yet to be recorded in history is to bring into consciousness what only the body knows to be true. The body—that site which houses the intuitive, the unspoken, the viscera of our being—this is the revolutionary promise of 'theory in the flesh…' (xxiv)"—Cherríe Moraga, co-editor of This Bridge Called My Back

You Don't Have to Be Everything: Poems for Girls Becoming Themselves Edited by Diana Whitney (Workman, 2021)

I was three years old when the voices of women of color came together and created living history with the anthology, This Bridge Called My Back, edited by Cherríe Moraga and Gloria Anzaldúa. The above quote, from the 2015 fourth edition, unzipped the memory of coming on connect with the collection in my early years of college. The work within it is one of the early originators of the concept of intersectionality. The existence of This Bridge Called My Back has contributed to creating space for the 68 voices in the new anthology, You Don’t Have to Be Everything: Poems for Girls Becoming Themselves (Workman Publishing) edited by author, poet, and queer mother of two, Diana Whitney. Readers familiar with the 1981 text will recognize how You Don’t Have to Be Everything continues the conversation within a different format for a new generation.

This anthology is a curation of one-third BIPOC and one-third LGBTQ+ poets, and invites non-binary, trans, and cis-gendered girls to be themselves without apology. The text engages poetic styles across free verse—short lines, long lines, intonations of hip-hop, and bold, rich monologues—with content that traverses poverty, loss, celebration, and sexuality across a broad spectrum of lived experience from poets at different stages in their careers.

The collection, which encompasses young poets, canonical poets, slam poets, Instagram poets, US Poet Laureates, and all voices in between, represents what Whitney describes as a democratization of poetry. This also extends to the visual component of the work. The verses are matched with a stunning visual landscape depicting the interpretation of these words by a community of international illustrators: Christina González in Ecuador, Kate Mockford in the UK, and Stephanie Singleton in Canada.

A key concept that informs the politics of this new poetic anthology is that of “theory in the flesh.” Looking back to This Bridge Called My Back, in the preface to the section, “Entering the Lives of Others: Theory in the Flesh,” this concept is defined as, “…one where the physical realities of our lives—our skin color, the land or concrete we grew up on, our sexual longings—all fuse to create a politic born out of necessity” (19). In other words, history and theory are not static when one lives in the skin that is still living and challenging those things. Also, it becomes a realization that one who lives in a specific kind of skin does not have the luxury of theorizing it within institutions, as the theory in flesh is a matter of everyday existence.

This theory of the flesh is crystallized in the piece, “Questions Asked to Me When I Was Ten,” by S. Erin Batiste, which carries an echo of the racial complexity presented by Mary Hope Whitehead Lee’s poem in This Bridge Called My Back, “on not bein.” Batiste’s approach builds tension, placing the reader within the poem and in her skin by employing a second-person point of view from the beginning with, “What are you? Why are you here? What neighborhood do / you live in? So you go to the good school?” The discomfort and truth within the telling continues towards a fever pitch with, “Why are your eyes shaped / that way? Are you sure you’re not half-Korean? Chinese / Japanese? Vietnamese? Indian? Native? Mexican? Cuban?”

In a different way, race and attitude are explored in Amanda Gorman’s “Black Daughter’s Pointillism.” This piece is another kind of theory in flesh through the only concrete poem in what appears as a ballerina on point given the language within her verses. The reader of this poem witnesses an act of conjuring as Gorman declares, “Even in my quiet I / Gather stories like a sitting desk / Seeks dust.”

This spellcasting piece, its brand of theory of flesh encoded within tightly crafted lines, closes with a bang, leaving no room to question her unflappable truth within the “seeing” of her verse:

“We bow, not cuz we broke, but as an oak bends, arching toward light.
In this faith, we wink and glimmer like a bright fist of glass, each of us a
Serrated piece
Of girl hard
At work.”

Gorman’s poem is one of the many ways I appreciated how the verses within You Don’t Have to Be Everything expand upon the body’s telling. They also journey into the realm of a digital landscape that did not exist upon the original publication of This Bridge Called My Back.

While this kind of communication was not available, it did not inhibit the impact, and I make this point to illustrate the ways that these conversations now continue in spaces beyond our imagining. One of many examples is five-time national slam poet Dominique Christina’s work, crafted as an open letter in “The Period Poem.”

Even if you are not one of the 1.7 million viewers of her performance of this poem on YouTube, the power of Christina’s words lifts off the page early in this dramatic monologue:

You’re the reason my daughter cried funeral tears
When she started her period.”

To the nameless Twitter user who mistakenly thought he secured his cool by bragging about dumping his girlfriend for starting her period during sex, the poem continues to school and righteously scold,

“But when your mother carried you,
The ocean in her belly is what made you buoyant,
Made you possible.
You had it under your tongue when you burst through her skin,
Wet and panting from the heat of her body,
The body whose machinery you now mock on social media,
THAT body wrapped you in everything”

For anyone who knows the pain, disdain, and confusion of one’s first period, this piece isn’t without some of this sage instruction: “Should any fool mishandle / The wild geography of your body, / How it rides a red running current, / Like any good wolf, or witch, well then…/ Just BLEED.”

Other pieces connect us directly to the unmistakable politics of the indigenous body within the American landscape. This is true of many pieces, and Natalie Diaz’s “Why I Hate Raisins” is an eloquent example: “I told my mom I was hungry. / She gave me the whole bright box. / USDA stamped like a fist on the side.” The poem recalls and exposes a history that is still impacting many indigenous bodies. Diaz writes, “I still hate raisins, / but not for the crooked commodity lines/ we stood in to get them—winding / around and in the tribal gymnasium…I hate raisins because now I know / my mom was hungry that day…”

The poems in this new anthology, like the words within Natalie Diaz’s verses, continue to support the main point made by This Bridge Called My Back. The fact that when one walks in a certain kind of skin, one does not have the privilege of debating history and theory. One lives it.

These poems within You Don’t Have to Be Everything resume the cross-generational dialogue, and given the precedent set by the 1981 work, they become poems exchanged between the living and the ancestral, but not without recognizing the shifts within the feminist movement.

In her preface to the 4th edition of This Bridge Called My Back, Moraga shares her sharp analysis of the feminist movement, stating, “In recent years, even our understanding of how gender and ‘womanhood’ are defined has been challenged by young trans women and men of color. They’ve required us to look more deeply into some of our fiercest feminist convictions…” (xvi).

This contemplation is among the many unique facets of You Don’t Have to Be Everything. The collection extends a purposeful invitation to challenge what is meant by girlhood. Within the discussions that call on us to re-think, challenge, shift, or erase categories when needed, it is fitting that this work does the same in featured pieces like Kayleb Rae Candrilli’s “On Crescents & Transition & Waning.” In this piece, for Candrilli, girlhood looks like, “A scalpel and my breast tissue / became biological / waste.”

The idea of breast tissue becoming biological waste is within a new adolescent landscape that we did not allow ourselves to imagine over 40 years ago. In similar ways, Cameron Awkward-Rich’s “Meditations in an Emergency” reminds us of the way that the world is still very dangerous for bodies that do not fit within the boxes we have created. The reality that is called out in this poem comes towards the end with these lines:

“…There’s a dream I have in which I
love the world. I run from end to end like fingers
through her hair. There are no borders, only wind.
Like you, I was born. Like you, I was raised in the
institution of dreaming. Hand on my heart. Hand
on my stupid heart.”

Awkward-Rich’s poem, and many others within this new anthology, may have the power to force us to challenge our institutions of thinking and language. It has happened before: This Bridge Called My Back created a new standard, forcing institutions to re-think their approach to everything from Ethnic Studies to Women, Gender, and Sexuality departments.

You Don’t Have to Be Everything takes on another dimension by challenging how we conceive of girlhood, not merely by expanding the emotional landscape in these verses in terms of what we think of their realities (oppression, poverty, sexual abuse, body dysmorphia), but also forcing us to widen our vision to break the construct of gender and sexuality. This collection is nothing less than a reminder that we owe it to the world to challenge what it thinks it knows—because we are the theory in flesh. We dwell within bodies that know a living and breathing history and a truth that nobody can school us on.

SHANTA LEE GANDER is a mutli-faceted artist. She is the 2020 recipient of the Arthur Williams Award for Meritorious Service to the Arts and 2020 and named as Diode Editions full-length book contest winner for her debut poetry compilation, GHETTOCLAUSTROPHOBIA: Dreamin of Mama While Trying to Speak in Woke Tongues, out this June. See more of Shanta Lee's work on her website (link to www.Shantaleegander.com).