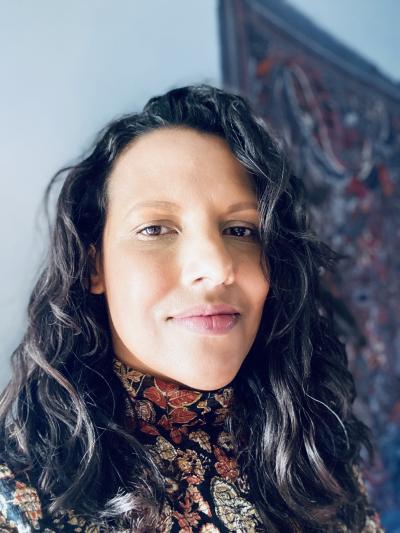 Begin with a plant
then an animal. Move
your way up the chain of need
till you’ve learned enough
about sacrifice and scooping poop
to join the ranks of mother.
—from "Naturally," Volume 62, Issue 1 (Spring 2021)

Tell us about one of the first pieces you wrote.
Let’s see. There is one that has always stuck with me. It was about a woman driving to Canada. It was about the threat of violence that women endure and about the weight of beauty ideals, I think. It was a delightfully strange poem. One line went something like, “If my ear was closer to the ground, perhaps I could hear the conversations between the ants. . . But I have killed many of them in my lifetime and nothing is scarier than the revenge of small things.”

What writer(s) or works have influenced the way you write now?
Oh gosh, where to start. I can tell you which of my books are the most worn and well loved: Lucille Clifton’s, Good Woman, Dawn Lundy Martin’s, A Gathering of Matter, A Matter of Gathering, Valzhyna Mort’s Collected Body, Vievee Francis’ Forest Primeval, Ada Limon’s, The Carrying, and Alejandra Pizarnik’s Extracting the Stone of Madness. There are so many, but these have been particularly impactful. Each of them came to me when I deeply needed them. They have taught me a lot.

What other professions have you worked in?
Ha! Too many. I counted once when I was in my early thirties and I think I had about twenty different jobs, thirty if you count under the table gigs. The bulk has probably been in hospitality, retail, and office management. Some of the most bizarre were in my late teen’s early twenties: house painting, door to door vacuum sales, and deep-sea fishing. For a while I was willing to try just about anything.

What did you want to be when you were young?
Oh, that’s easy, a dancer or a singer. Preferably both. I grew up watching a lot of musicals and a lot of MTV. So, either Barbara Streisand in Funny Girl, or a backup dancer for Janet Jackson. If someone created a show that was a combination of the two, I’d be all over it. Hmm, maybe I should write it.

What inspired you to write this piece?
Cancer is a stubborn beast. I’ve been cancer-free since my surgery in 2013 and yet it’s still so present. It’s changed my body. It still costs me money. I have a different relationship to mortality than I did before my diagnosis. This particular poem came from a place of anger and frustration, but also a place of wonder. Being in that high rise fertility clinic on the upper east side with all these young wealthy women and their mothers was a very odd experience. It felt kind of out of body. Like I was watching a movie of someone’s life that wasn’t mine. When I wrote this, I was grappling with how cancer has affected my ability to reproduce. It’s complicated. More than anything this poem is a poem of grief, of mourning the body of ease I once had, of mourning what may never be, of mourning a kind of innocence, I suppose.

Is there a city or place, real or imagined, that influences your writing?
It’s funny, I grew up in Santa Cruz, CA, but never felt like I quite fit in there. I left over fifteen years ago and the longer I’m gone, the more I realize how “Santa Cruz” I am. This shows up in my writing usually in the form of water. There’s quite a bit of water and beach and waves in my poems. I’ve always been terrified of tsunamis and sharks. I was the anti-surfer in a land of surfers. I suppose water haunts me. The ocean and I have a complicated relationship.

Is there any specific music that aids you through the writing or editing process?
I wish there was. I love that idea, but alas I need silence when I write. Occasionally, I can listen to mellow classical music. If there are words, or if the music has intense emotion, I get lost in the world of the music and I can’t focus. I do have one CD (yes, I still have CD’s) that I can work with occasionally: Heaven or Las Vegas by the Cocteau Twins. I think because the tempo of the music is relatively consistent throughout the album and, I’m embarrassed to say, I don’t really understand the words, but I love the mood it creates.

Who typically gets the first read of your work?
It all really depends on the poem. If I have a poem about a topic that happens to be in a friend’s wheelhouse, then I’ll share it with them first. If the poem I wrote is about my parents, I’ll often share it with my mom. She’s also a writer so she has a good ear. I also have a handful of poet friends I trust who give honest feedback in a manner I respond well to.

What are you working on currently?
Well, what I am focused on now are my comprehensives for my doctoral degree. My first full-length manuscript is out there looking for a home. I also have a second poetry project I’ve started, but I can’t say too much about it at this point.

What are you reading right now?
Too many things. At the moment, both my scholarship and my poetics are engaging the impact of trauma on the body. The Body Keeps the Score by Bessel Van Der Kolk, Pedagogies of Crossing by M. Jacqui Alexander, and A Geneology of Resistance by M. Nourbese Philip are just a few of the books on my desk. In terms of poetry, a book I read recently that devastated me in the most beautiful way was Seeing the Body by Rachel Eliza Griffiths which was published last year, I think. I can’t say enough about that book.

JAMAICA BALDWIN hails from Santa Cruz, CA by way of Seattle. Her work has appeared, or is forthcoming, in Third Coast, Prairie Schooner, Hayden’s Ferry, The Adroit Journal, The Missouri Review, and TriQuarterly, among others. She was the winner of the 2019 San Miguel de Allende Writers Conference Contest in Poetry and received an honorable mention for the 2019 International Literary Award’s Rita Dove Prize. Her writing has been supported by Hedgebrook and the Jack Straw Writers program. Jamaica is currently pursuing her PhD in English at the University of Nebraska–Lincoln.