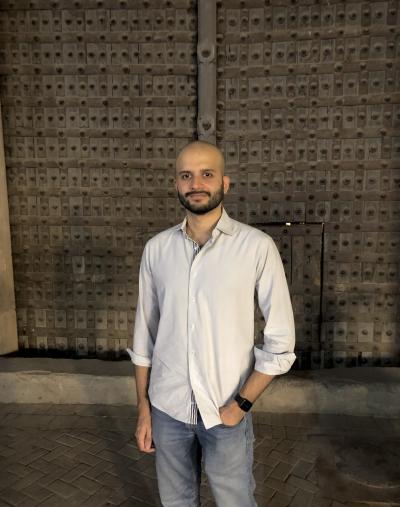 On Main Boulevard, the Ramzan traffic comes to a halt. The car heater makes a whirring noise. A thin layer of fog hovers in front of our Honda City.

On the radio, the singer Junaid Jamshed recites a naat. In an interview, he has said that Pakistani women should stay at home. Now Mama says, If more women worked, the economy might be better. Then I say, The field hands in the countryside are mostly women. Mama makes a face.
—from "Charity," Volume 62, Issue 1 (Spring 2021)

We asked writer Munib Khan the same ten questions we ask our other contributors. He responded with a few of his own.

When did you first get acquainted with fiction?  When did you start to learn English, and how did it manage to become your preferred language for literature?
I grew up reading the Urdu poets. My uncle Ghulam Sabir Kaifi, who was a poet, lived in the apartment next door. As kids, we memorized and recited poems. We were competitive. I read so much Urdu fiction. I think there came a point where I couldn’t find the Urdu novels that were written for me. There is great fiction being written in Urdu now and there was great fiction being written in Urdu when I was growing up in Lahore in the 90s but it wasn’t for me. There were too many novels in English, old novels and new ones, that spoke to me. Made me feel like I wrote them myself in a different life or at least a kindred spirit (perhaps a family member) did. We didn’t have cable. We had a subscription to the Times and Newsweek, we had three channels on the TV and we had the bookshops. We watched the movies on VCR that my parents watched. Sometimes we listened to the radio. There was not much privacy growing up. I fed on the novels. The space they provided for someone like me, the way the conversation with a novel continued for months, sometimes years, taking care of the loneliness, the way they calmed me down. I have always been very anxious, I think.

How did you end up in the States?
I took a year off after high school. I wanted to live abroad like all the great writers I’d read about but I couldn’t pay for an education myself. I needed a scholarship but it was the peak of the Great Recession. Funding lines were being dropped. I thought I’d take the year to apply to colleges in America and Europe and East Asia. Anywhere I could write and read books and travel. I watched movies and wrote during this year. I remember sending a portfolio of fiction with every college application. It was grim stuff.

Tell us about one of the first pieces you wrote.
I stumbled into writing my first real short story in Connecticut College; it was published in Prairie Schooner. It was about drone strikes being conducted by the Obama administration in Pakistan. I loved Obama in ‘08 and ‘09 and was heartbroken to see how he ramped up the drone strikes in my country. That he said he signed off on all of them himself. I remember the novelist Blanche Boyd saying to me, But Munib, we never kill civilians. I don’t think there was much coverage of American drone strikes in Pakistan in ‘08, ‘09 and ‘10. So I wrote this story for my American classmates, for Blanche because they were the only people who were listening. I had a great time in college working with Blanche. She taught me everything I know about writing and reading short stories. She is an amazing novelist and teacher.

You are not based in the US anymore? How did that happen?
I was in the US for twelve years—in school throughout. That’s a long time to be anywhere. All my family is in Pakistan. They are not likely to move abroad at my request. Being a graduate student, during my MFA years and then PhD, was also tough. It’s hard to live in small towns on a student visa; it has always felt like some kind of indenture to me. The reasons for leaving a country or returning to one’s home are not easily explained. One could write novels about such things. Shortly after my grandfather passed away, I moved back to Lahore. The pandemic hadn’t started yet. It was supposed to be a temporary move to give me time to reflect. It worked. I think I’ll stay in Lahore a while.

What is Lahore like?
I grew up playing cricket in Lahore. I understand the way people speak to each other here. The sounds of the city, the birds, the trees, they are familiar to me. In Lahore I have never felt powerless or excluded. Lots of people in Lahore are not so lucky and I have a lot of privilege. I feel calm when I go for a run at night. For now, it’s a city I have no problem living in, but I know nothing lasts. And a city can become diseased for a person so quickly.

Are you working on a collection of short stories?
I don’t write short stories anymore. “Charity” is from the final batch I worked on last year. In the years I was writing in America and attached to American universities, I read and wrote mostly short fiction. I submitted a collection of short stories for my doctoral thesis this February. All of them are published in good journals. I have been lucky. But I am in no hurry to put a collection out. Actually, since I have moved back to Lahore, I am in no hurry about anything. I am writing a novel. A bildungsroman. I think it’s the kind of book I’d like to read.

What are you reading right now?
Recently, I have been reading Annie Dillard, Karl Ove Knausgaard, Elena Ferrante, Teju Cole, Momina Mela, Hillary Mantel, and Kazuo Ishiguro. I have also enjoyed reading the essays of Dr. Saeed ur Rehman and the translations of the poet Naveed Alam.

Do you have any rituals or traditions that you do in order to write?
I try to remain as still as possible. I lie in my bed or on the couch or I sit on the balcony of my apartment. I stare outside the window. There are crows in the sky usually. I listen to Max Richter, Beethoven, Philip Glass. I look at paintings. I talk to myself. I drink coffee. I clean. Loneliness brings out writing fast for me. A lonely apartment, a lonely street.

If you could work in another art form what would it be?
I’d like to make movies.