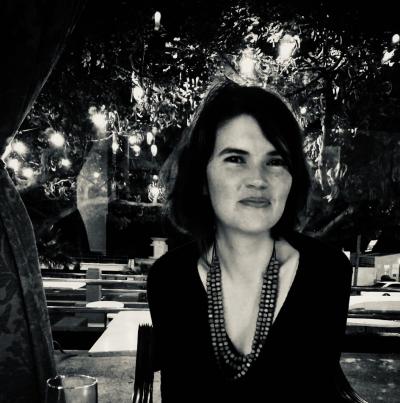 When the forest fires in the northwest were no longer annual, monthlong catastrophes but a yearlong inferno, the question of what to do with the refugees pressed more urgently on both officials and those who lived on the ede of the woods. The occasional discovery of a moose in one's garden had been in the past a surprising and welcoming event, but now they were taking up residence, grazing on lawns and flowerbeds, denuding the shrubs, and filling up the pungent air around them with clouds of black and stinging insects, for moose are notoriously odoriferous.
—from "Ursa Minor," Volume 62, Issue 1 (Spring 2021)

Tell us about one of the first pieces you wrote.
A governess takes leave of her wits at a mission station in the rural Cape Colony.

What writer(s) or works have influenced the way you write now?
Deborah Levy and Penelope Fitzgerald.

What other professions have you worked in?
I’m one of those academics who has always been an academic.

What did you want to be when you were young?
At various times, an Egyptologist, a ballet dancer, and a pastry chef.

What inspired you to write this piece?
On the day of Brett Kavanagh’s confirmation hearing I coped with my distress by reading about the annual fat bear competition held by Katmai National Park. Somehow I began there, and arrived at a bear adoption scheme.

Is there a city or place, real or imagined, that influences your writing?
Maine—which is still a relatively new landscape for me—is an influence now. But the landscape of the Boland, where I grew up in South Africa, is probably the most important.

Do you have any rituals or traditions that you do in order to write?
None. I’m motivated mainly by a combination of fear of not writing enough, and guilt that I’m not finishing it on time. I do like writing on trains, though.

If you could work in another art form what would it be?
I really wish I could draw.

What are you working on currently?
A conversation between two Bactrian camels.

What are you reading right now?
I’m between novels: I’ve just Ginished Nicola Lagioia’s Ferocity which I liked a lot, and am about to re-attempt The Friendly Young Ladies by Mary Renault. I bought it at the Harvard Bookstore’s warehouse sale last year and was not really in the mood for it then.

SARAH EMILY DUFF was born and raised in South Africa, and was educated at Stellenbosch University and at Birkbeck. She is an historian of age and education, and now lives and works in Maine.