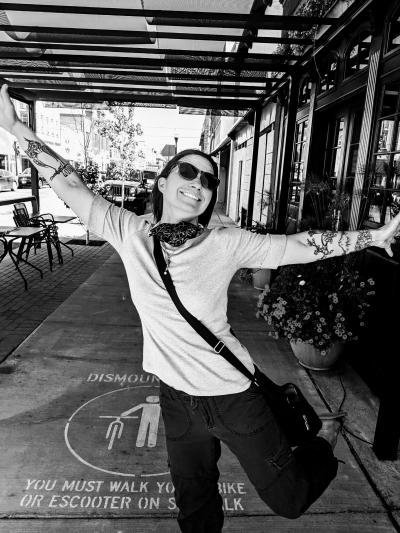 The baby encased in a thin membrane is something like a cross between a basketball and a cantaloupe. It lies at the woman's feet on the bed. Her skin prickles at the sight of the living being moving inside. It is not trapped in her anymore; it is a separate being, helpless and suffocating. She presses the heel of her foot into the shape with a sense of caution against crushing the thing inside. She feels an urgent need to release it.
—from "What Our Bodies Cannot Hold," from Volume 62, Issue 1 (Spring 2021)

Tell us about one of the first pieces you wrote.
The first piece I ever wrote was titled, “Mrs. Hamilton.” I was ten years old, and Mrs. Hamilton was a 97-year-old woman that lived across the street. I liked to visit her because she always had candy—even better, she had a huge collection of plastic flowers. My obsession over these flowers was intense. One day, I charmed Mrs. Hamilton into going out to the garage and getting me some of these dusty, ancient flowers. She slipped down the stairs and broke her arm. Imagine my guilt. Mrs. Hamilton was okay in the long run, and the story was a big hit with my 5th grade teacher.

What writer(s) or works have influenced the way you write now?
When I was in my early 20s, I read a lot of Raymond Carver and John Steinbeck, so I know they had a huge influence over my writing. A contemporary influence has to be Maile Meloy. I love her stark honesty.

What other professions have you worked in?
I’ve been a babysitter, busgirl, receptionist, gymnastic teacher, chiropractic back office assistant, editor/proofreader, waitress, barista, student teacher, lecturer, and now I also own a nostalgic bar arcade (I’m still a lecturer, too!).

What inspired you to write this piece?
This piece was inspired by my brother, Fynn who suffered some of the worst indignities in this world. He was born one gender and left this world another. In between, he faced fear, loneliness, abandonment, confusion, and discrimination. It was my duty to tell this story.

Is there a city or place, real or imagined, that influences your writing?
Los Angeles is almost always lurking somewhere in my writing. I grew up there, and no matter what, it will always be a part of my memory and my being. I’ll never outrun it.

Is there any specific music that aids you through the writing or editing process?
When I was in college, I used to write all of my essays to George Winston’s piano music. Now, my son who is an aspiring pianist tends to be the background soundtrack in our house. . .that and barking dogs.

Who typically gets the first read of your work?
It depends, but generally speaking I am honored if my colleague Bethany Schultz Hurst reviews my work first. She’s a terrific poet, and I value her input immensely. Sometimes, if I am looking to make sure that I am representing a character fairly (particularly a male character), I’ll ask my husband to read it. If I want praise and validation, I usually turn to my mom.

If you could work in another art form what would it be?
I would have loved to be a singer in a rock band. I really do love performing and being on stage. I guess that’s why I was drawn to teaching. There’s certainly an element of performance, but no one has to be annoyed by my singing voice!

What are you working on currently?
I am in the midst of writing another lyric essay. This one is about my cousin who, at just shy of 19 years of age, was murdered in Los Angeles. The piece is about grief, violence, and motherhood. It’s been a difficult one to work on (obviously) because we are still mourning the loss of Skye, and representing family pain is very private. I want to tell the story with honesty and the utmost respect for the living.

What are you reading right now?
I am currently reading A Children’s Bible by Lydia Millet and So You Want to Talk about Race by Ijeoma Oluo.

TERA JOY COLE is the author of “You, Too” published in Adanna Literary Journal (spring 2019). Her flash fiction piece, “Franny,” was featured in Sky Island Journal’s spring 2018 publication. She is also the author of the short story, “Coyotes Don’t Litter,” which appeared in the online literary journal The Writing Disorder (winter 2015). Her first literary publication, “Where Things Are Made” was published by Blunderbuss Magazine (April 2015). She lives in Pocatello, Idaho with her husband and son and is a Senior Lecturer in English at Idaho State University. In her spare time, she likes to trail run with her dog.