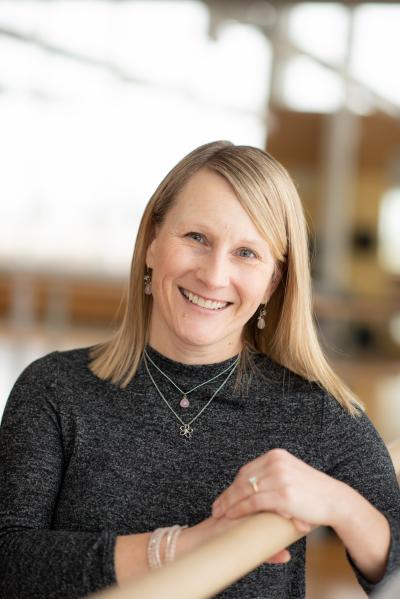 My brother and I sign the hospice paperwork for our father on a Tuesday. On Wednesday, I fly to San Antonio for a conference even though half of the attendees cancel due to growing concerns about something called coronavirus. There are no travel restrictions or warnings in the United States. Public health officials have deemed it safe. I need to get away from the dread-infused days of my career writing cancer magazines, my personal time caring for my father with dementia and blindness.
—from "Penance and Pandemic," Volume 62, Issue 1 (Spring 2021)

Tell us about one of the first pieces you wrote.
I wrote a short story in elementary school titled, “Revenge of the Nerds,” and remember thinking of the title first. I must have heard about the movie somehow even though I was too young to watch it. I knew my story title was clever because the plot was about Nerds candy coming to life and launching an attack through an open window. I like to think it was an early sign I wanted to turn an idea on its head rather than being a kid who couldn’t think up an original title.

In high school, I wrote volumes of rhyming love poems about my first love, Mike, and my mother saved them all in a big folder I should probably toss in the fireplace, but can’t because I loved Mike that much.

What writer(s) or works have influenced the way you write now?
Elizabeth Strout was my professor during the last semester of my low-residency creative writing program. I remember dissecting her novel, Amy and Isabel, to figure out how the book was structured. As a teacher, she had what I found to be invaluable and essential advice: first, always “write to the ache.” She does this beautifully in Olive Kitteridge, who is a wonderfully flawed and brutally honest character. Her approach to editing was to “trim the twigs” from the branch of the tree of your story. Everything that is not essential to the story can be trimmed.

I think of this advice every time I sit down to write, whether it is fiction or nonfiction, and it helps me remember what is most important to building forward momentum in a story or essay.

What other professions have you worked in?
I worked in advertising as an account executive, but gravitated toward writing. Most recently, I was the editor of a magazine for cancer patients at the University of Michigan Rogel Cancer Center. We also created a magazine about cancer research.

I started a company in 2014 called Big Bad Words, whose name was originally a joke, but then I began working for actual clients providing communications consulting, writing and editorial services for businesses and creative writers.

What did you want to be when you were young?
I wanted to be a broadcast journalist. I remember my mom saying I was going to be the “next Connie Chung,” because she was a respected female journalist on TV. The truth is I’m not serious enough to be a journalist. I goof around too much. My dream job is to write for The Onion.

What inspired you to write this piece?
My father was very ill with vascular dementia and had been declining for a decade. My brother and I signed hospice paperwork for him the week before the pandemic began. We couldn’t visit him for 10 weeks due to lockdown. During this time, I worked on photo albums and scrapbooks to document his life. Organizing the old photographs of his sailing career and articles about his accomplishments was a way to feel productive and connected to him. I knew I had to write about it because, as my teacher Elizabeth Strout said, I had to write to the ache.

The message from the Massachusetts Review accepting my essay for publication arrived as I sat at my father’s bedside on the day he died.

Is there a city or place, real or imagined, that influences your writing?
My novels and stories are usually set in the Midwest or Florida, where I’ve spent a lot of time, but I often invent places in these regions. I drafted a cleaning lady novel that spans a week in which she cleans 5 different houses. I aimed to make each house and its inhabitants a place in and of itself. I also drafted a novel set at an imaginary theme park in Orlando that is Disney’s store-brand neighbor. I drafted a novel in an imaginary city in Ohio called Notnac, which is my town (Canton) spelled backwards. I draft a lot of novels. It’s how I spend my free time. I could use an agent, actually.

Do you have any rituals or traditions that you do in order to write?
I refuse to abandon old projects and continue to revise them. During the pandemic, I joined the Women’s Fiction Writers Association. They hold virtual write-ins nearly every day. We check in and say what we’re working on. It’s a great way to stay motivated and hold each other accountable. When I need a break from my current project, I’ll go back and revise an old one.

If you could work in another art form what would it be?
I’d like to take drum lessons from Dave Grohl. I’m inspired by artists who love the work they do. If he’s not making music with the Foo Fighters, he’s collaborating with other musicians, having a great time doing it.

What are you working on currently?
I’m drafting a new novel in the vein of Eleanor Oliphant is Perfectly Fine. It’s called Step Back Joanna. A 25-year-old aspiring social worker struggles to build a life in Chicago despite the obsessive-compulsive tendencies she was punished for as a child. She is forced to reckon with her past when she learns history is on repeat for her much-younger brother, who runs to her for help.

What are you reading right now?
I’m doing an Ashtanga yoga training, so I am reading The Heart of Yoga by T.K.V. Desikachar. I’m also reading the stories in Jesus’ Son by Denis Johnson, who is a favorite author. I sometimes joke he was my Uncle Denis, but that’s a lie. I wish.

BETH UZNIS JOHNSON is a Best American essayist and McGinnis-Ritchie Award recipient whose writing has been published in Story Quarterly, the Rumpus Readers Report, Southwest Review, Cincinnati Review, Mississippi Review, Gargoyle, and Best American Essays 2018. She has an MFA in fiction from Queens University of Charlotte and works as the editor of two magazines at the University of Michigan Rogel Cancer Center. She writes from suburban Detroit.