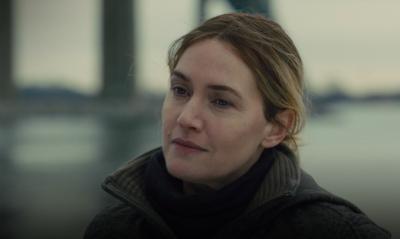 (Photo: Kate Winslet as Mare in a scene from Mare of Easttown)

I was surprised, and more than a little perplexed, when I realized that Mare of Easttown is a soap opera. I consider myself well-versed in soapy television (I’m currently in the weeds of a dissertation about melodrama), but I had trouble reconciling Mare of Easttown’s gritty dialogue and earthy palette with the plot’s soapy twists and turns. The soaps I know and love, like General Hospital, have historically had a more candy-colored hue.

Each episode of Mare of Easttown got detective Mare Sheehan a little closer to solving the murder of seventeen-year-old Erin McMenamin, and, for me, each episode ushered in a new level of wide-eyed incredulity. My attempts to make sense of the soapiest plot twists left me woozy. Mare’s ex-husband may have secretly fathered Erin’s baby? Erin’s dad kidnapped her killer and shot him in the woods? Erin’s dad actually shot the wrong guy? Mare planted heroin on her dead son’s girlfriend in an attempt to avoid a custody battle over her grandson? A man confessed to an extra-marital affair he had with Mare’s mother at his late wife’s funeral?

At first, I didn’t know what to make of Mare of Easttown’s hybrid form: part police procedural, part devastating drama about grief, part campy soap. But then I grasped that, in Mare of Easttown, the soapy structure is, in fact, the key to the show’s most poignant point: in Easttown, the past is forever crowding in on the present.

When we experience something unspeakably horrible, we tend to hope (I do, at least) that each day thereafter will be a little better than the last. We hope that the healing will be a linear process with a beginning, middle, and an end. Mare of Easttown tears down that too simple fantasy. For its characters, moving on from the past is never a linear process. Instead, it’s one step forward, two steps back, or perhaps even several steps to the side.

The residents of Easttown cannot move on from their pasts in a straightforward, linear fashion, no matter how sorely they may want to, because Easttown is awash in ghosts. Mare is haunted by her father’s and son’s suicides, and she frets that this history of mental illness will manifest in her grandson—that the past will repeat itself all over again. In an uncharacteristically timid moment, Mare asks her therapist, “Do you think, maybe, it’s something you inherit? … You know, suicide, mental illness. I read a bunch of articles about these scientists who think maybe it’s passed down from generation to generation.”

As a means of diversion and as a way to move on from her son’s death, Mare engrosses herself in detective work. But try as she might to move forward, she is repeatedly interrupted by memory flashes of her son and pulled back to the shock of his loss. Eventually, Mare’s therapist warns her outright that, no matter how many cases she solves, “the grief is still going to be there, waiting for you.”

Mare treads in the wake of traumatized TV detectives who came before her, especially Rust Cohle, who was haunted by the loss of his own child in HBO’s last great small-town, prime-time detective drama: True Detective. But while Rust’s inability to move past his trauma makes him into something of a Louisiana alien, the impossibility of leaving the past alone is an experience shared by each and every Easttowner. Dawn Bailey is haunted by the disappearance of her daughter and unable to move on from the possibility that she might still be alive. The ghosts that stalk Lori Ross are her husband’s past infidelities and the likelihood that he’ll cheat again. Beth Hanlon is haunted by her brother’s long-standing battle with addiction; she fears that he’ll steal from her to finance the addiction again as he has been wont to do in the past. All over Easttown, the past lingers uncomfortably in the present. People relapse into addictions, cold cases heat up again, and old high school nicknames prove impossible to shed.

It’s Mare of Easttown’s interest in non-linear healing that resonates so well with its soapy plotting. Soap opera plots usually refuse to move forward from point A to point B in a predicable way. For decades, critics like Tania Modleski and Dennis Porter have argued that soap operas refuse the linear narrative structure of a beginning, middle, and an end. Instead, soaps persistently defer resolution; rather than tying up the loose ends of a plotline, soaps will present new complications. Just when you think you know where a plot is headed, the story scampers off in a stunning new direction.

In some small way, having our expectations jerked to and fro while trying to follow Mare of Easttown’s soapy plots puts us viewers in the shoes of the Easttowners. Just when we think we know how the plot will move forward, some soapy turn derails us. As the characters attempt to move on from their pasts, their paths forward are likewise interrupted and halted by painful memories, ineradicable cycles of behavior, and the anxiety of inheritance. For us viewers and the characters both, moving forward is a very tricky business.

The wrenches that soap operas like General Hospital are best known for throwing into their plots always seem to drag the past into the present: dead characters are resurrected; long-lost family members find their way home; amnesiacs recover memories; and yesteryear’s secrets bubble up toward the surface. While Mare of Easttown doesn’t go quite so far (no resurrections, dramatic familial returns, or memory loss here), the show does take an inspirational cue from this grand soapy tradition.

And then there’s the matter of the ever-delayed resolution. Some soaps, hurling wrenches left and right, stave off narrative resolution and avoid ending for decades. Guiding Light (1952-2009), As the World Turns (1956-2010), General Hospital (1963-), and Days of Our Lives (1965-) have managed to stay on air for more than a half century. But when a soap opera is at last forced off the air—the fate that all soap operas must eventually face—the storylines can be exceedingly difficult to conclude. As Tania Modleski says, the soap opera’s habit of deferring resolution after resolution in storyline after storyline can make soap plots very tough to untangle finally and definitively. Sometimes, even when a soap opera goes off the air, various plotlines are, necessarily, left without narrative resolution.

The last episode of Mare of Eastown takes a couple of feverish cracks at narrative resolution and puts on a showy parade of tied-up loose ends: the real father of Erin’s baby turns out to be her uncle, John Ross, who goes to jail for her murder; Mare’s ex-husband gets remarried; Mare gets custody of her grandchild; and the characters share a number of revelatory heart-to-hearts. The near frenzied pacing of these points of narrative closure bespeak the trouble implicit in untangling and ending plots whose conclusions have been addled and deferred time after time.

Given this trouble, it should come as no surprise that, even after the final episode’s montage of tidy endings, and just when you think that the screen must surely be on the verge of fading to black, the plot unravels all over again. In a watershed instant, Mare realizes that Erin’s killer isn’t John Ross after all, but his middle-school-aged son, who killed Erin in an attempt-gone-wrong to scare her into ending her relationship with his father. This final twist seems to be a testament to how forcefully a soap plot can drag its feet when approaching its own ending, injecting complications and postponing resolution until its very last breath and maybe even beyond it.

Mare of Easttown’s final episode has come and gone, but much is still unresolved. The crumbling of Dylan’s (Erin’s ex-boyfriend) alibi, which is afforded extensive attention earlier in the season, remains something of a loose end. For an episode or two, his boorish refusal to account for his whereabouts on the night Erin was murdered made him into Mare’s prime suspect, but even after Mare closes the case and rules him out, we never do find out exactly where Dylan was on the night in question and why it necessitated a cover up. Likewise, the romance that has been building between Mare and visiting professor Richard Ryan has no real resolution. He leaves Easttown for a position at Bates College, and as he packs his car, Mare asks, “Why do you have to go now, just when things are feeling good?” Why, Mare seems to ask, does Richard have to throw a wrench into their romance just as they are approaching a happy ending? His reply is quite in keeping with the volatile structure of soaps: “Who knows? I stopped trying to predict life a long time ago. What I do know, though, all the best things in my life came to me unexpectedly…”

Mare of Easttown’s soapy practice of perpetually deferring resolution, even past the show’s end, underscores grief as an endless process. Just as narrative closure is deferred and delayed within and beyond the show, so too is emotional closure for the characters continually deferred and delayed. In the final shot of the season, Mare does finally bring herself to climb up to her attic and face the spot where her son died, yet we still have the feeling that the grief Mare has will be everlasting and the healing process never linear.

After all, in this same, ostensibly final episode, one of Mare’s fellow Easttowners asks her about the grief of losing a loved one: “Does it get any easier?” While Mare equivocates, responding that “after a while you learn to live with the unacceptable,” her more succinct, simple, and direct answer to his question is “No.”

Alexandra Swanson is a Ph.D. candidate in English literature at Washington University in St. Louis, where she studies nineteenth-century melodrama and its afterlives.