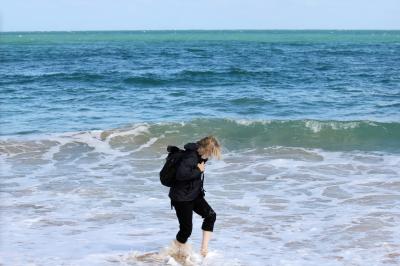 Tell me, what does dusk do
to Sydney Street, spent of all
our afternoons, and I'll teach you
how to say November
until it's rent of moth and flame,
its every last leaf a rhetorician,
asking what is tether without float?
—from "Leaving Chelsea", Volume 62, Issue 2 (Summer 2021)

Tell us about one of the first pieces you wrote.
As a child, I wrote a story about a sister and brother befriending a Martian. It was my first and last foray into science fiction. But the desire to explore various kinds of connectedness has remained constant—although it took me years to figure out I was the Martian.

It’s harder to name only a few poets because there are so many who reveal new possibilities for what a poem can do in ways that inform some of the risks I take in my work. I’m not so much influenced by them as I am simply grateful for them. For example, Alice Oswald’s Dart has not only made me think differently about what a river is but also how place can be written about. I’ve also gotten immense pleasure from the surprising but just-right cognitive and emotional leaps that occur in poems by Mary Ruefle, Paige Lewis, and Heather Christle—whose “Advent” is one of my favorite short poems. Overall, I tend to gravitate toward the elegiac—still marveling at Rilke’s elegies—and I’m drawn to contemporary poets who both engage and resist elegy, especially its consolations. I find Victoria Chang’s Obit and Solmaz Sharif’s Look particularly compelling and moving. And Danez Smith’s “summer, somewhere,” the first poem in Don't Call Us Dead, is one I return to for its heart-breaking perfection.

What other professions have you worked in?
I’ve bussed tables in a steakhouse, worked as a bank teller, a short-order cook, a coin store clerk, a bookstore clerk, and a reporter for a biotech trade newsletter. For most of my life, though, I’ve taught literature.

What did you want to be when you were young?
At first, a physician; then an oceanographer or marine biologist.

What inspired you to write this piece?
A few years ago, my partner and I were lucky enough to live in London for three months. After returning home, I felt bereft in ways I couldn't fully articulate. That’s when I began writing “Leaving Chelsea.” In London, our lives seemed lovingly attuned to the daily rhythms of the streets we walked and to the small historic garden we regularly visited. I became reacquainted with old ghosts: people I love who have died, including my parents, as well as writers who have haunted my literary imagination for years, like Wilfred Owen. I also glimpsed future ghosts. So I wanted to bring together these layers of leave taking: the ways we say goodbye to people and places—rehearsing goodbyes before it’s time or falling short when it is time—and how goodbyes in the lives of other people can move us, even a century on.

Is there a city or place, real or imagined, that influences your writing?
All my poems seem to me as if they are about place in some way, even if not overtly.

I’ve been keenly aware of place all my life, in part because my parents were so conscious of it—especially my mother, who was driven from her home and her country by war. She loved our house and took care of it with a tenderness that, in retrospect, was probably also imbued with a longing for places forever lost to her.

I tend to love places with an intensity many people seem to reserve only for other humans. I’m unabashedly in love with London and much of the UK (which might explain why I mourned the Brexit vote as if it were happening in my own country). The poem “Leaving Chelsea” is, in part, about having to pull myself away from the life force (and ghosts) London awakens in me. I’d never seriously considered the idea of having lived a past life until the first time I travelled in the UK, in my early thirties. My eyes kept filling with tears, both in London and in Cornwall. I had never so fully and profoundly felt I belonged to a place.

I also have great affection for the Maryland of my childhood and early adulthood, the small Ohio village where I’ve now lived for many years, and even for many places I’ve visited only once. But I consider my mysterious yearning for England a poetic consolation prize for not being able to live my life there—an unrequited love of sorts, one that is intensified because I was adopted and don’t have any knowledge of my origins. This love of place connects to me to other kinds of longing—both distinct and vague, both my own and others’—that I try to give voice to.

Is there any specific music that aids you through the writing or editing process?
Most of my writing happens in silence so I can hear the words that need to make themselves heard. But I’ll often listen to Joni Mitchell or Katell Keineg just before I get into my writing space. For music without words, Oscar Peterson is a frequent go-to, as is Max Richter.

If you could work in another art form what would it be?
The theatre. I’d love to work on stage set design—from painting large backdrops, such as a city’s silhouette, to choosing small props, such as a character’s favorite coffee mug.

What are you working on currently?
A group of poems that feature individual artifacts from various museums. I am especially interested in how a viewer’s experience of an object, curated and contextualized in culturally formalized ways of seeing, can become transgressively intimate.

What are you reading right now?
Judith Schalansky’s An Inventory of Loss, Carolyn Forché’s In the Lateness of the World, and Tove Ditlevsen’s The Copenhagen Trilogy: Childhood, Youth, Dependency. I’m also enjoying dipping into The Golden Shovel Anthology: New Poems Honoring Gwendolyn Brooks; many of my favorite poets have contributed to this collection.


ANNETTE OXINDINE'S poetry appears in the Gettysburg Review, Gulf Coast, New Orleans Review, Southern Indiana Review, and Willow Springs, among others, and is forthcoming in Colorado Review. She has also published scholarship on the work of Virginia Woolf and Elizabeth Bowen. She lives in Ohio, where she is a professor at Wright State University.