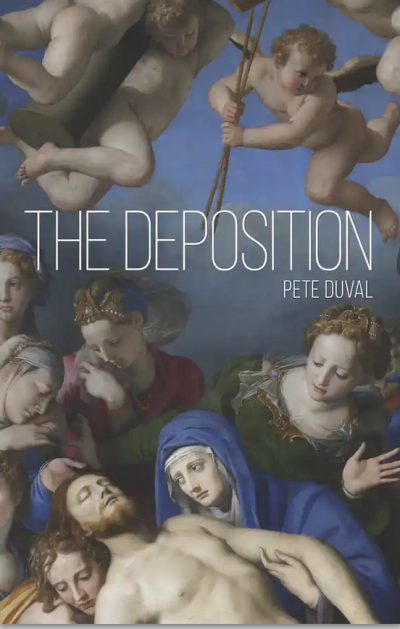 A Review of The Deposition by Pete Duval (University of Massachusetts Press, 2021).

I’m going to be straight with you: this is not going to be one of those neutral and dispassionate reviews. The fact is, I know Pete Duval. Not only have I chosen his work (including stories in this volume) for publication in the Massachusetts Review, but I have also talked fiction with him over breakfasts in a now-defunct Middletown diner, drunk Jameson and Guinness with him in a Philly dive, and even driven halfway across the country in a snowstorm with him. So when I tell you that The Deposition is a handful of luminous and hard-hitting short fiction, a collection replete with images and sentences that linger like unhealed wounds in the reader’s memory, you can take those claims with whatever sprinkling of salt you like. Though you don’t have to take my word for it: Duval’s first collection, Rear View, won Breadloaf’s Bakeless Prize, and this book bears the Juniper Prize imprimatur.)

Take them with salt, then, but take them. I like Pete but I love serious fiction, well-made stories that are after something far beyond mere self-expression, explorations through structure and character of fundamental questions, phrases wrought at once in metaphor and existential angst, and The Deposition offers all of these.

Duval is interested in whether and how the divine inheres in a thoroughly fallen world, whether and how the Word might somehow hide within our words. His title and his title story yoke these considerations of worldly and otherworldly; the deposition is at once a legal interview from which a callow lawyer is driving across Iowa and the interment of Christ’s body, often depicted in medieval and early modern European painting—the dark prelude to the miracle of resurrection.

At the heart of the story, the lawyer asks the mysteriously bleeding priest to whom he has offered a ride: “When they say that the Virgin Mary was assumed bodily into heaven, what does that mean exactly?” The priest is having none of it: “Look, it’s technical is all I’m saying.” Pressed, he admits to his own belief, but he makes clear at the same time that the priest’s belief will have no effect whatsoever on his amateur interlocutor. This conversation—the lawyer trying to depose the priest, whether to prove fraud or find evidence to support a desired conviction—gives way to something of an object lesson; in a surprising turn, the priest pulls from his jacket’s inner pocket a pistol, and he asks the lawyer to shoot him. The scene that plays out in a middle-of-nowhere cornfield leads to conclusions I will not reveal, but that we leave the comfort and familiarity of the lawyer’s Lexus and come to life and death at gunpoint across an open-channel ditch, that we come to swaying steps and swallowed shots and the rejection of abstract considerations of sin and redemption is characteristic of Duval’s entire enterprise in this book. Damnation and salvation, sin and prevenient grace, exist only in the body’s inchoate experience, in the failure of our words to speak the Word.

All of which makes Duval sound like a writer in the vein of Graham Greene or Flannery O’Connor, and while that’s not entirely wrong it’s also not quite right. The family resemblance, that is to say, is more theological than narrative or stylistic. Neither of those forebears could have ever, I submit, produced a passage like this one, from “Meat,” in which the narrator’s coyote friend, Norbert, demonstrates his own dogma, having, like other characters throughout the book, found verbal argument finally insufficient:

Norbert rears back like a cobra and buries his snout above its breastbone and the fawn explodes in an aerosol of gristle and blood. It’s keening now, bellowing, screeching, a sound so far over the top, at first I laugh, and when I fall back against the ladder, something jangles and plummets to the grass behind me. I never even knew deer had vocal cords. And the noise coming out of Norbert now is stranger still, half laugh, half howl. Singing with the others as they feed. Like one being, rapt and joyous. He rears, scrambles over to me, and spits the animal’s heart into the grass at my feet.

One could try to wire this reasonably to the Church’s doctrine and discipline, but, well, it’s technical is all I’m saying. This is the body, this is the blood. Something about a covenant. Communion. Duval’s telling is compelling.

Which is, in part, to say that there are other salutary influences at work in these stories. Duval’s characters’ theological curiosities and commitments echo those on offer in the stories of Andre Dubus. In “Meat” and “Common Area,” the punchy syntax and sinister dialogue of Thom Jones may be heard. Duval works situations up to tense levels of implicit threat as characters say not quite what they think, talking past each other while their bodies send and sense at once the subtle cues of what is really going on. Things of the world are awkward, uncontrollable. They don’t fit any better than acts fit their motivations or advance their actors’ goals. Whether in the dream world of Kiev in “Keepers” or the nightmarish suburbs of Florida in “Sinkhole,” the miraculous is just one poke through the scrim of everyday life, and Duval’s sentences jab right through, only to show that the manifestation of the divine is terrible. Human beings cannot bear much of this reality.

In this regard, and especially in the novella-length (and simply brilliant) “Strange Mercies,” Robert Stone is the malevolent prophet whom Duval has conjured in the Underworld and taken guidance from. In that story’s sweatily delirious pursuit of a saint and her stigmata, in its frisson of underhanded politics (whether ecclesiastical or post-Cold War), in its fevered chess games, frantic spousal phone calls, black market video cameras, pirated amateur porn, Ron Medellin rum and Aguila beer, the story of a Catholic TV network cameraman who goes AWOL (and a little nuts) after catching footage of what he is sure is an authentic miracle is reminiscent (in all good ways) of Stone’s in extremis characters in exotic locales.

Duval transforms these Stone echoes to satisfying loaves. In his focus on real blood, real bodies, the gummy bolus of the unchewed Host, he puts the carne right where it belongs, in the miracle of the Incarnation, and he reminds us that life’s mysteries are Mysteries, when taken with appropriate seriousness:

Except for the wandering dogs, their eyes flashing from the alleys, the city seemed deserted. The chairs and tables had been stowed away; the curlews were silent. There was no moon. No one rushed up to him. He shouldered his messenger bag, painfully, and shuffled along a narrow street. The Lord had taken again to flickering in and out of existence, like a fluorescent light bulb in an abandoned bodega, but then the same could be said for Mayhew himself. He had the most remarkable thoughts sometimes.

I wouldn’t wish on Duval much of how his characters experience the love of God, but he does have the most remarkable thoughts sometimes, and when he frames them in the kind of sentences he often pulls off here, the results are surely miracle enough.