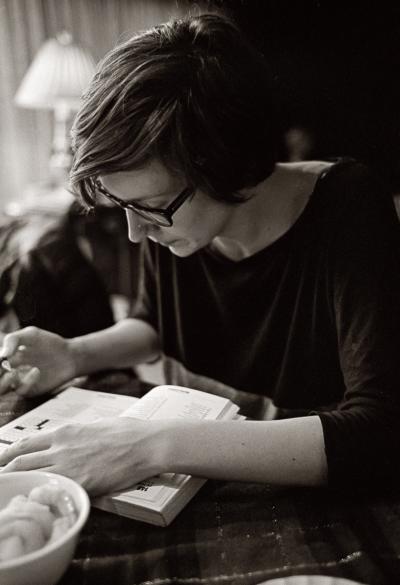 The biggest snake
is an albino so huge his scales, when they lift from his body
as he curves around a rock or rodent, look like big, dry, flakes of oatmeal.
—from “The Rattlesnakes They Keep in the Life Sciences Building Remind Me of My Dog”

Tell us about one of the first pieces you wrote.
When I was a kid, I was flagged for a pull-out program in my elementary school. They’d take us into the library and, as far as I remember, let us work on whatever we wanted. That’s where I first remember writing a lot, and many of those childhood attempts were imitations of Ray Bradbury stories, written from the perspective of an alien kid. When I transferred to a private, Catholic school after 5th grade, I first started really writing poems. The school was very strict and the students were rigidly classist/conventional and I was miserable. Writing poems during math class made it look like I was taking notes, not escaping.

What writer(s) or works have influenced the way you write now?
In his brilliant and funny 2019 Blaney Lecture, Terrance Hayes asks a series of questions about the canon, including this favorite: “Would you say Jorie Graham, Louise Glück, the late C.D. Wright, and the late Lucie Brock-Broido are evidence of Emily Dickinson’s influence on a generation of contemporary women poets or would you say white women poets?” Like many (white) women, a lot of my poetry is rooted in Dickinson. I had my first serious encounter with her during my last year or so of college. I was reading her poems in my American Lit seminar and in my Contemporary Poetry class I read Anne Carson and Carl Phillips. They’re all very important to me today, so that must have been one of the most enduringly meaningful semesters in my educational life. Now I find myself imitating the speed and deceptively casual (deceptive in that both authors use that casualness to deploy profound arguments about the way the world is/should be) colloquialness of poets like Rachel Zucker or Tommy Pico, or the bravado/intensity of books like Diane Seuss’s frank: sonnets, or Diana Khoi Nguyen’s Ghost Of, or Benjamin Garcia’s Thrown in the Throat.

What did you want to be when you were young?
I don’t remember what I wanted to be before I wanted to be a writer. There might have been things I said (maybe a veterinarian? A teacher?)—but there wasn’t anything I really wanted. In elementary school, a children’s book author visited our school and when it was time for Q and A, I asked her what she got paid. Always the rationalist—and, at that age, always hoping to understand writing as a real job.

What inspired you to write this piece?
Across the way from the Piper Center, where I used to work, Arizona State’s Life Sciences Building houses many reptiles in tanks built right into the hallway walls. Anyone can go take a look at them between classes or meetings, and I often did. That albino snake looked to me, somehow, so much like my dog (I find myself saying this a lot about animals I’m relating to! “That lizard looks just like Stubb!” “That bat looks just like Stubb!”) and I always felt bonded to him. The snake, Hector, died in 2019, but two of his offspring continue to be displayed there.

Is there a city or place, real or imagined, that influences your writing?
A lot of the settings in my poems ping pong between the west and the Midwest, like I have throughout my life, but my writing is probably most influenced by the non-place/fake space of the afterlife. A lot of my writing expresses or considers existential anxiety. That anxiety is most potent for me when I try to imagine what the non-life after death might be like—I try to imagine my own body in a grave, the claustrophobia of experiencing that, if a body after death could experience, and then, when that contradiction becomes too glaring, I try to imagine nonexperience. Of course, I imagine nonexperience through the lens of my body/brain, the only tool I have to imagine anything, so it still is an experience, in my mind. Like in this poem you published, the anxiety that idea produces—that nonexperience is unimaginable, a complete unraveling of the world’s whole existence as the mind unravels—can become so urgent in my life that it prevents me from seeing/understanding things as they are, or making simple judgements.

Do you have any rituals or traditions that you do in order to write?
Usually I fit writing into my day however I can—it’s convenient to be a poet! I don’t think prose writers can work in just this same sort of way—so ritual isn’t that big a part of my everyday writing life right now. When I was working from an office, I made a point of leaving for a place without internet access every day during lunch. I don’t have a smartphone, and those unmediated moments were really important to my writing life. I tried to write a poem during my lunch break every day for quite a while. I hope to get back to that kind of ritual when I return to in-person work.

Who typically gets the first read of your work?
My husband, Kent Corbin, is usually my first reader—but most of the time what I want from him is a “keep going!” He’s a great editor constrained by my ego.

If you could work in another art form what would it be?
I always wish I could get actually good at playing an instrument. Each time I try, I learn really fast for a few months and then I plateau. I can play the piano and a little banjo—but on the level of a precocious middle schooler.

What are you working on currently?
As COVID began, I started a novel-in-verse from the perspective of a woman in a cult. I was able to finish a draft of it when I visited the Millay Colony in November. Now I’m holding off on writing new poems, mostly, and have, instead, been sharing single poems from that manuscript with a great poet-friend, Brad Modlin, and starting to think about revision. Thinking about narrative across many poems is not necessarily my first instinct, writing-wise, so this has been a big experiment for me. I’m trying, now, to give myself the space I need to really see the poems and the manuscript as a whole for what it really is.

What are you reading right now?
I have like twelve books at various stages of completion at all times. Right now my pile on our coffee table consists of Felicia Rose Chavez’s The Anti-Racist Writing Workshop, Kayleb Rae Candrilli’s What Runs Over, and Susan Choi’s Trust Exercise. My pile on the couch contains Victoria Chang’s OBIT and Girlhood by Melissa Febos. The pile on my nightstand consists of How Not to Die by Dr. Michael Greger and many next-in-line books, but who knows when I’ll finish all these so I can get to them.

KATIE BERTA lives in Arizona where she works as the supervising editor of Hayden’s Ferry Review. Her poems have appeared or are forthcoming in Prairie Schooner, the Kenyon Review, Blackbird, The Rumpus, Sixth Finch, Redivider, Green Mountains Review, The Offing, Indiana Review, Salt Hill, and Washington Square Review, among other magazines. Her book reviews appear on Ploughshares’ blog, West Branch, Harvard Review, and elsewhere. She has received fellowships from the Vermont Studio Center and the Virginia G. Piper Center for Creative Writing. She has a PhD in poetry from Ohio University and an MFA from Arizona State.