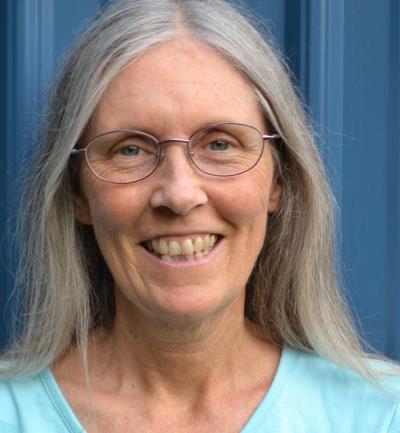 Tell us about one of the first pieces you wrote.
The first poem I wrote was about standing by the pond at dawn watching a beaver quietly backstroke as sunrise turned October’s gold-leaved hickories briefly pink. The poem was probably terrible. When I got news later that day that my beloved uncle had died at that very hour of a heart attack, it seemed as if someone had handed me poetry and said, “Here, you’re going to need this.” Four years later, my first published poems appeared in the Atlanta Review. One is titled simply “Joy,” and the other is “A Love Poem for My Muse,” which begins, “Why are you such a tight-lipped she-hag, anyway?” I still really like that poem and the she-hag that inspired it.

What writer(s) or works have influenced the way you write now?
I turn to Todd Davis, Pattiann Rogers, and Mary Oliver for their exquisite insights into writing about nature. I miss Tony Hoagland; I was also an adolescent in the 1970s, the era of sex, drugs, and rock and roll, and his poems helped me write my chapbook, Wild Horses. Reading Al Maginnes and William Wright has enabled me to write more complex, intricately woven poems. I can only dream of using language as fresh as Patricia Smith’s or metaphors as clear and strong as Ted Kooser’s, though I try. Reginald Dwayne Betts shows me how deeply honest and revealing poems can be. I love the clarity and richness, the generosity of spirit in every book I’ve read by Ellen Bass. My sister, the poet Rebecca Baggett, has been my greatest guide and inspiration.

What other professions have you worked in?
High school camp counselor for children and adults with special needs; staff member and later financial manager of a natural foods cooperative; horticulturalist and mail-order nursery owner, which led to a career as a freelance garden writer and lecturer that I gave up when I became my mother’s legal guardian. Now that she’s gone, I’m just a writer. When the pandemic allows, I’ll return to teaching poetry workshops.

What did you want to be when you were young? What inspired you to write this piece?
In high school I planned to major in Special Education. At fourteen, I had begun volunteering with a group of teens called the LUV group (Let Us Volunteer). It was the 70s, and we had a bus named Bertha that we painted to look like The Partridge Family bus. We worked with the local Parks and Rec Department planning dances for adults with disabilities, hosting Special Olympics practices and helping at those day-long events—we always had something fun going on. I also worked for five years at their summer day-camp for children and adults with disabilities. Then at seventeen, I developed a passion for gardening, so I ended up becoming a horticulture major.

Those beautiful experiences were invaluable when my mother developed Alzheimer’s disease. I had interacted with many people with varied degrees of ability in high school, which helped me relate to my mother at each stage of her decline. When she could no longer match six puzzle pieces, for instance, I gave her four, then two, then I put puzzles away and found something simpler. I enjoyed her company. We laughed. I accepted her for who she was and what she could do and remember. Tracking the intent of her conversation when she began to lose language was something I became adept at, like the way I follow her eyes in the poem “Stripes” to see what she’s meaning. “Stripes” is an effort to express with love and without judgment what a day with my mother was like.

Is there a city or place, real or imagined, that influences your writing?
The outdoors, nature and wildlife, appears in almost every poem I write because I’ve lived my entire adult life on a mostly-wooded forty acres in central North Carolina, the oak/sweet gum/hickory forest threaded with ephemeral creeks whose edges blossom in March with thousands of spring beauties, Claytonia virginica. This past spring, I saw at least fifty thousand open flowers per day at peak blooming. Scenes like these insist on becoming poems, though a single sunlit bloom or leaf can resonate as deeply. I was born at the Atlantic Ocean, though, and still feel it’s my deepest home. I consider the ocean the most powerful natural force on the planet, beautiful and wild and guaranteed to give you a decent perspective on how tall you stand in the scheme of things.

In the years I was in charge of my mother’s care, she hijacked almost every poem I wrote. One day I typed “Climate Change” at the top of the page as a title, intending to write about the devastating losses we face, and instead I wrote a poem that uses climate change as a metaphor for memory loss. After that I accepted that Mom was my flood subject and other things were going to be secondary. It’s really freeing when you get out of your own way and let what needs to be said come to the page. Now that she’s gone, I’ve written many more nature and climate change poems.

Is there any specific music that aids you through the writing or editing process?
I can’t write or edit with music playing. When the Allman Brothers jam or the Black Pumas belt out “Colors,” everything stops while I listen. Music’s too powerful; like the ocean, it’s too much of a life force for me to ignore. The music of my adolescence—the Rolling Stones, Hendrix, the Doors—is a central theme of my chapbook, Wild Horses, which of course takes its name from the Stones’ song. I didn’t play their albums to write it, though. Those songs are imbedded in my DNA. 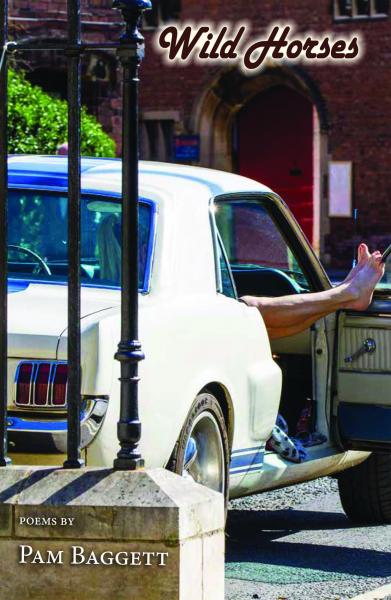 I walk a couple of miles before breakfast every morning and have for decades. When I was a garden writer on deadline, I’d sometimes start walking and find myself speaking most of the article into my voice recorder. Clearly, I’d been composing it in some deep hidden place in my brain. These days I often start poems while walking, which go on the recorder unless writing seems more useful than talking; for instance, if I’m observing deer I don’t want to frighten. I always have a mini-composition book and pen in my pocket for that purpose. Other than my walks, I have no rituals except to show up at my desk as often as possible, preferably every day.

Who typically gets the first read of your work?
My sister, the poet Rebecca Baggett (author of God Puts on the Body of a Deer and The Woman Who Lives Without Money), is often my first reader; my best friend Joan Barasovska (author of Birthing Age) is another. I also have the most marvelous Zoom critique group made up of members who met through one of Ellen Bass’s recent craft workshops. We’re scattered all over the country and would never have met otherwise, an extra benefit to what was already a brilliant series of lectures.

What are you working on currently?
Because of the pandemic, because I’ve lost my mom, because more than twenty people I loved have died in the last eight years—relatives, friends, residents I came to love at my mother’s memory care facility—I’m weary of writing about grief and loss. I want and need to write about beauty, humor, joy, hope. It’s Ross Gay’s fault. There’s so much joy in Catalog of Unabashed Gratitude that when I read it I suddenly wanted to be someone who could write like that. So that’s what I’m working on—trying to figure out how to write compelling poems without always leaning on death or the specter of mortality. There has to be another way.

What are you reading right now?
I’ve just begun The Books of Kells by Barbara Crooker, whose first poem’s first line reads: “Night opens its woven basket, spills / spools of thread on the worn rug / of the sky.” A lovely beginning to what promises to be an intriguing book. My friend Joan recently gave me William Wright’s newest work, Grass Chapels: New and Selected Poems, and I’ve just received my contributor’s copy of the journal Nimrod, so I have a lot to look forward to.