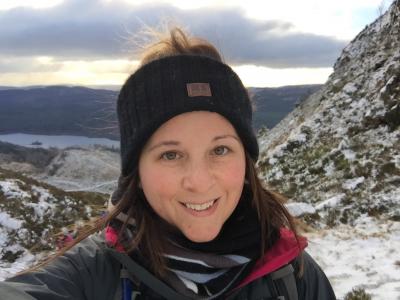 When someone is brought back from an overdose by Narcan, it can be a violent business: the body goes into immediate and intense withdrawal, and it can feel like you've had the shit kicked out of you. The person may be confused and terrified, and so it seems a reasonable repsonse to be angry. A lot like what it must feel like to be born: ripped from nonexistence and unconsciousness into the bright, noisy, messy business of living.
—from "Deaths of Disparity," Volume 62, Issue 3 (Fall 2021)

Tell us about one of the first pieces you wrote.
The first pieces I really remember writing were in junior high, when I wrote lots of Goosebumps-inspired short stories. The first piece I ever had published titled, “The Period Calendar” was MANY years later in which I wrote about that same time in my life and getting my period during a time when teen pregnancy dominated cultural fears and imagination. I didn’t realize it at the time, but this piece was definitely one of my first forays into what I now refer to as “Essay as Activism.” When I wrote it, I didn’t think of it as being political writing, it felt more like a solipsistic exercise in navel gazing. I can look back at that essay now and see that without saying it outright, I was examining the complexities of being female and having our bodies feared and policed, and how in turn we often are afraid of and police our own bodies. I would go on to write much more overtly political pieces on gun control and other issues, paving the way to my eventually writing on this issue of disparities in death and dying.

What writer(s) or works have influenced the way you write now?
So many! Over the years, my writing has been heavily influenced by other personal essayists who use their experiences and observations to drive the narrative on similarly complex issues. Such authors, and their books, include Leslie Jamison and her 2014 book The Empathy Exams, Eula Biss’ 2009 Notes from No Man’s Land and On Immunity: An Inoculation, as well as Rebecca Solnit’s many books including Men Explain Things to Me (2015) and The Mother of All Questions (2017). These women have addressed such topics as empathy, vaccinations, race in America, and sexism and women’s rights, and all have written on these topics via the self to varying degrees. I’m incredibly grateful to have so many intelligent, talented, and interesting women writers to look up to!

What other professions have you worked in?
I began my working life in textbook publishing, where I eventually became Acquisitions Editor for nursing textbooks. I always think that in another life it would be so fascinating to be a health care provider, and I have the utmost respect for nurses, as their job is really centered around patient care. I have also worked as an adjunct college instructor and writing tutor for a community college and a health sciences university. I recently took on the role of Writing Program Coordinator for Mount Tamalpais College, a dedicated 2-year college for San Quentin Prison. I’m super excited to be able to not only advocate for social equity by writing, but also through the actions of my work.

What did you want to be when you were young?
For a while I wanted to be a vet, until I realized I really just wanted to cuddle pets not perform surgery on them. So, now I have three cats that I can cuddle to my heart’s content (at least when they let me). I also always wanted to be a writer!

What inspired you to write this piece?
A writing instructor once told me to “write where the heat is”. In 2013, I wrote an essay titled “Pushing Up Mare’s Tails” about a time I accompanied my dad to a potter’s field, which is a cemetery for people too poor to pay for their own burial, and this essay was hot. It grew bigger over the years and spiderwebbed out with each new experience I encountered in what became a quest to learn more about death and dying, and ultimately, how they intersected with poverty and homelessness. This led me to my PhD work, which resulted in my creative nonfiction book Not All Deaths Are Created Equal, which explores several angles of death, dying, and inequality. This essay, “Deaths of Disparity,” developed as I looked more closely at the lives of those who experience chronic homelessness and how such a life can lead to a trajectory of multiple co-morbidities, inequitable or nonexistent end-of-life care, and early death.

Is there a city or place, real or imagined, that influences your writing?
All the places I call home infiltrate and heavily influence my writing: my hometown of Fresno and my home state of California, and my two adopted homes: Boston, MA and Glasgow, Scotland.

Do you have any rituals or traditions that you do in order to write?
A LOT of procrastination. In fact, recently my husband came upon me in the living room while I was moving furniture around. When he asked what I was doing, I responded, “writing, of course!” I also like to have a full cup of coffee (iced preferably).

If you could work in another art form what would it be?
I’d have to say photography. I spent some time years ago taking photography classes, learning to use a dark room and I just love how a single photograph can tell a story and evoke emotion—it does what writing does but without words.

What are you working on currently?
I’m working on two separate projects. One is a collection of essays on hiking, which is an absolute obsession for me. The other is a murder mystery, which is quite the departure from my normal CNF work. I’ve never actually tried to write a mystery or any novel-length fiction for that matter. The main character is a backcountry ranger in the Sierra Nevada, so it will pull from my love of hiking and trail experience.

What are you reading right now?
I usually have at least two books going at once. One is always a mystery/thriller and one a nonfiction book. I’m currently reading three books: a Ruth Ware mystery called One by One; Meaty by Samantha Irby, which often has me laughing out loud; and a nonfiction book about the socio-political influences on the monsters that have become popular throughout history called Monsters in America: Our Historical Obsession with the Hideous by W. Scott Poole.

AMY SHEA has a PhD and an MFA in creative writing from the University of Glasgow, where she has written a collection of essays titled Not All Deaths are Created Equal. Her work has appeared in the Portland Review, Spry Literary Journal, Fat City Review, From Glasgow to Saturn, and Sociology of Health & Illness. As an avid hiker, she likens her doctoral experience to that of her climb up Mt. Kilimanjaro.