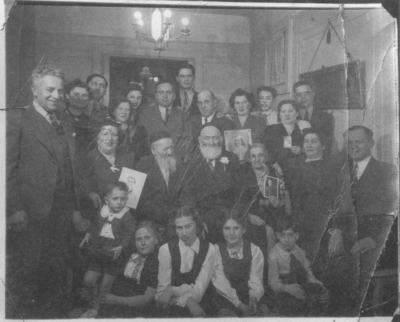 (A Chametzky family photograph, Brooklyn, NY, 1942. Jules Chametzky, fourteen years old, is standing in the back row, second from the right, next to his father and behind his mother.)

When we met in Berlin he adopted me as a student and ultimately became my Doktorvater. He invited me to team-teach the course "Broadening the Canon," my own first introduction to a broader overview of American ethnic literature. (By the way, he had limitless patience with the students, whether they were superrevolutionary, linguis­tically challenged, or both.) He would always be commenting on something he "happened to be reading" at the moment rather than saying directly, "you should read...." And he impressed  me as a scholar who really lived what he taught, had, for example, a keen interest in Afro-Germans and Turkish Berliners, an unstop­pable eagerness to travel upon any occasion and a bold readiness to crack another linguistic code. "Mediation" is something that Jules lived, as he inspired genuine excitement about new topics and about new places. And we were in many, many places together from the original IKEA furniture outlet in Vaxjo to Carmen's tobacco factory in Seville, from Memphis to the Dolomites; and we sat in an old Mercedes together that broke down, fortunately, close to Frankfurt airport; in a Saab or in a Toyota. A Fulbright daredevil, he has been to Yugoslavia, Italy, Germany, Denmark, among many other places.

Jules's and Anne's Amherst house became like second home to me, a house always open to people who would drop by or come for meals. Among the many, many people I met through Jules were Isaac Bashevis Singer, Richard Rodriguez, Mary Doyle Curran, Jerome Liebling, Mike Thelwell, Sidney and Emma Kaplan, Doris Abramson, Henry Steele Commager, Allen Guttmann, and Leonard Baskin. Or the phone would ring and it would be Sterling Brown, for example, asking for Jules. I know that I was never able to reciprocate his unbelievable generosity as a teacher and friend—I only tried to imitate him in my relationship toward students and younger scholars.

One of many stories I heard from Jules that I have told my students is an apocryphal one, and I would like to end my little tribute on that note. Isaac Bashevis Singer is going to a reading and asks a friend for a favor: "Could you please ask the first ques­tion when I am finished? It will make me less nervous to know." When the friend agrees, he is told to ask, "Is there a relationship between your stories and Chagall's paintings?" After Singer's reading the friend dutifully asks that question, and Singer responds with, "Vat a stupid kvestion!"

Werner Sollors is Henry B. and Anne M. Cabot Professor of English, Emeritus, at Harvard University. He served as chair of Afro-American Studies from 1984 through 1987 and from 1988 through 1990, of History of American Civilization from 1997-2002, and of Ethnic Studies from 2001 through 2004 and in academic year 2009-10. The above excerpt is from an essay written for a Festschrift for Jules, published by the Mass Review in 2003.