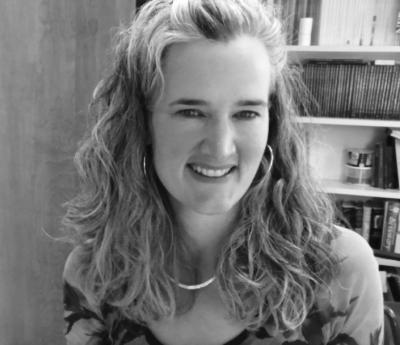 Look, I'm alive. And this park, Wright Park it's called—a scrappy woodland just a half mile down the road from my home—is alive too, living and dying at once, whether I'm there to see it or not.
—from "Wildflower Season," Volume 62, Issue 3 (Fall 2021)

Tell us about one of the first pieces you wrote.
I have boxes full of notebooks of various kinds—diaries with a tiny lock and key, black-and-white speckled Mead notebooks, plaid clothbound books with too-tight bindings, and sleek Moleskines. These are full of barely legible writing that has always felt like a lifeline to me, the only way to make any sense of the overwhelming chaos of just living and being and the relentless passage of time. They are rough records of the most concentrated thought and feeling but also of everyday life: Today I did this. One of my very first pieces of writing, then, would have to be the lockable diary with Ziggy on the cover, and a speech bubble saying, “Afterthoughts to think about.” That phrase always bothered me, but I filled the book nonetheless.

What writer(s) or works have influenced the way you write now?
Virginia Woolf is behind everything somehow, but I’ve read so many thousands of published and unpublished works for the New England Review that of course I’ve been influenced by them too, their moments of ingeniousness, their subtle mistakes, the brilliant phrases buried in an otherwise shaky piece of work, and the pieces that make the contents of my mind shift around, both painfully and pleasurably.

What other professions have you worked in?
Apart from several obligatory food service gigs, almost all my “professions” have been in some way related to words and type. Not long after that first piece of writing came my first profession: “paperboy” for the Morning Call, which was a job I did before sunrise through most of high school. The smell of wet ink on newsprint, cool morning air in all weather, that tired, burning sensation behind my eyes can bring it all back. It was miserable and yet I loved it, probably because I had the illusion of being the only person awake in the whole world, walking up and down the hills of the West End of Allentown in the quiet as the sky changed color.

What inspired you to write this piece?
I wanted to put into words all that goes on when it appears nothing is happening and nobody is going anywhere. To give shape to the repetition and variation of a particular path I kept walking, and to the repetitions that are my life, which to me never seems static at all. I first thought of calling it “Staying Put,” because I was both frustrated and enthralled by my own small world, but then it grew into more than that. Ultimately, I just I wanted to move all of this out of the closed circuit of journal writing and into a shape that pleased me and that others could possibly read.

Is there a city or place, real or imagined, that influences your writing?
My adopted home is all over my writing of recent years. Vermont, its history, its identity, its people, its plants. Of course it’s much more complicated than our department of tourism would have you believe. I’m not a real Vermonter. I haven’t hiked Camel’s Hump since college and I’ve never hunted deer or done any maple sugaring. And yet it feels like home to me. Behind this current place are the places I left behind: Allentown, PA, first and foremost; Minneapolis after that; then a little bit of Brooklyn.

Is there any specific music that aids you through the writing or editing process?
I love this question, especially since I mention a playlist in the Mass Review essay but made myself cut out all the details. I figured listing the songs would be about as useful as describing the details of a dream. But since you asked, the playlist began with “On My Block” by Scarface and ended with “Complicit” by the Weather Station, with Wye Oak, U2, Dreamers’ Circus, and Troye Sivan in between. “Stop This Train” by Joshua Redman is one of very few pieces that’s perfect for both running and writing, with its lift and drive but not too much of it. And I would be remiss to not mention Max Richter, who has dominated my writing playlists for centuries now. Whenever I need to change up that playlist I turn to my friend Hugh Coyle, who is writing the longest, most complicated novel of anyone I know and has discovered enough music to last a lifetime, especially for those of us who like to listen on repeat.

Do you have any rituals or traditions that you do in order to write?
The usual: coffee and the early morning. Headphones for music and to block out the rest of the house. Avoid the internet. When I fall out of the habit, which is often, I make myself record how much time I spent at my desk each morning, telling myself, come on, you can do a half hour every day, can’t you? If I can start with that it inevitably turns into more.

Who typically gets the first read of your work?
Depends! For my shorter and time-sensitive pieces it’s usually my husband, Christopher Ross, who’s a ridiculously talented writer, reporter, and editor and can be counted on for an honest, precise, and loving response. For my novel, I turned to the brilliant and compassionate fiction writer Leslie Bazzett, right from the beginning, because I knew somehow she would get it but would also be able to detect the weaker points. And I’ve recently rediscovered the intelligent bounty of my friends from college—Alix MacGowan, Meghan Laslocky, and Liz Monson, in particular—and my sister-songwriter Anne O’Brien. They each bring something different and essential.

What are you working on currently?
I just finished a round of revisions on a novel that I still love most days, and that I hope my agent and co-conspirator Jaclyn Gilbert will be sending out later this fall. I’ve also got an essay in the works, and a short story that takes place in a state park campground, because I don’t think I’ve ever read a story in that setting and it’s such a weird one—all those people with their tents and campers and cars, their conversations at picnic tables, all out in the open like that.

What are you reading right now?
Braiding Sweetgrass by Robin Wall Kimmerer. Yes, me and so many others. The owner of the Vermont Book Shop in Middlebury says it’s their bestselling book of all time, at 400 copies and counting, beating out even Harry Potter. A Rain Taxi reviewer said that this book “has changed everyone I know who has read it.” There’s so much clear-eyed wisdom here about living through natural and cultural devastation (indigenous people already did this once)—so many lessons but also so much beauty, specificity, and active hope. I’m also reading Genevieve Plunkett’s debut story collection, Prepare Her. We published two of these stories in NER, she’s a fellow Vermonter, and I admire her sensibility, eeriness, and concision so very much. Next I’m going to read the print issue of the Massachusetts Review, cover to cover.

CAROLYN KUEBLER'S writing has appeared in The Common, The Literary Review, Rain Taxi, and The Little Magazine in Contemporary America. She lives in central Vermont where she edits New England Review, serves as a justice of the peace, and is the mother of a teenager who reads books.