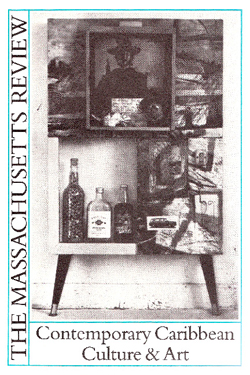 So, you want to find out what really is happening in the Caribbean art world, or on the carnival scene, or in the theater, or with dub poetry? Go to the room behind a certain panyard around six o'clock before practice begins, or the rum shop be hind the studio down by the docks on Friday afternoon after work.

As you approach what you hope is the right door to that room, snatches of the conversation reach you between the slam of dominoes and the blare of the sound system "—representation— quality of light—I told you I would pay you back in U.S.—cultural relevance—a who seh Sammy dead?—pram! pram!" The closer you get, the more you feel the urgency, the hilarity, the desperation and the underlying seriousness in the voices. You open the door and everything stops. Everyone turns to inspect the intruder. In a fraction of a second they have worked out who you are. Then everyone is talking again. And yet you have this feeling that it is still quiet.

As a Caribbean person living outside of the region, I've been on both sides of that door. It's not always clear how people work out who's on the inside and who's not. Certain foreigners have honorary status. Certain locals elicit a stony silence. There is a way that West Indians fix themselves when they know they are being inspected for the umpteenth time—an intuitive response, nurtured perhaps by innumerable slave auctions, external examiners, televangelists and oversized satellite dishes—that makes us shift infinitesimally in our seats at moments like these in what looks like a gesture of welcome, even deference, but is really a refusal to let the Other see into your soul.

So when I say: "Please send me something on contemporary anglophone Caribbean Culture for a special issue of The Massachusetts Review I'm putting together," everyone responds, "Sure, man!" But they mostly don't, or what they send sounds nothing like the conversation did before the door opened. All the creative energy and heady cantankerousness are missing. Time to formalize such conversations for outside consumption is a luxury in societies where currency values are being decimated faster than the natural fauna of the region and the sense lessness of crime and poverty, in the words of short story writer Olive Senior, makes God look "one-eyed." But people are writ ing, and painting, and creating and contesting all kinds of cultural agendas throughout the Caribbean and its diaspora. We do it so that we can hold on to some sanity and spirituality or hustle a few dollars in a world where value has many meanings and none. We do it because we have big mouths and enjoy playing mas'. We do it because, if we don't, our points of view may get lost in the cacophony of old talk in the room behind the panyard, beyond the studio, or inside the rum shop.

So in the end it comes down to networks. By cajoling, eaves dropping, talking fast and plundering other publications, I have pulled together here a completely unrepresentative collection of voices and images culled from cultural conversations taking place within anglophone Caribbean communities today. Some times the only way I could catch a conversation was to lift material wholesale out of its original context. I hijacked two essays from the Trinidad art magazine Galerie with the active connivance of its editor Geoff McLean. If you read them closely, you will notice that, behind Derek Walcott's generous tribute to the painter, Jackie Hinkson, and Chris Cozier's thoughtful descriptions of work by Cabral and Beckles, a serious bacchanal is still raging in the backroom about what constitutes "Art" and what direction "committed" Caribbean visual artists should be taking. Gordon Rohlehr's essay on folk culture is the text of an address to the Folk Research Centre in St. Lucia. He works hard in the piece to incorporate a variety of constituencies that have a stake in folklore in the region—the churches, the governments, the cultural nationalists and "the folk" (whoever they are—probably the brother of the guy holding the video camera filming the event). I don't know that he finds a convincing way to get all the new constituencies he identifies into the same frame (American televangelists? yaadis?). But it's his struggle to ar ticulate a dynamic cultural reality which I want the reader to understand. You see another version of that struggle in the essay by Natasha Barnes when she tries to locate where Chinese Jamaicans fit into the black/white contest for representational legitimacy in Jamaican beauty pageants. Yet another version informs Carolyn Cooper's controversial insistence on a space from which to read, without censorship, the cultural politics of rhetorical violence and anti-gay sentiment in Jamaican Dance Hall music.

Bruce King's forays into the Rockefeller archives reconstruct the steps by which the creative energy nurtured in those back room sessions establishes itself in the international arena. Thanks to the first wave of Caribbean cultural historians, we know about the little magazines, local patrons and international institutions that facilitated or disrupted all kinds of connections between Caribbean artists up to the 1950s. We know a lot less about the mechanics of cultural production since Independence. Where does the funding come from? How do the networks function? That, too, is part of the conversation that stops when the door to the backroom opens.

Autobiographical memoirs are a much-favored form of cultural expression among such established Caribbean writers as V. S. Naipaul, Derek Walcott, Jamaica Kincaid and, most spectacularly in recent months, Kamau Brathwaite in Barbajun Poems (1994). Two new voices here continue this tradition. Thomas Glave's essay on growing up gay and Jamaican in New York and becoming a writer opens up a dialogue with Cooper's piece on heterophobia and cultural chauvinism. The trains that thundered over his father's vegetable garden in the Bronx pro vide a vivid metaphor for the ways in which aesthetic boundaries constantly are displaced and re-established in the Caribbean diaspora. Ramabai Espinet's "Indian Cuisine" pushes past yet another cultural door that swings open and shut within the Caribbean itself, marking the shifting boundary between "Indianness" and "Creoleness" in places like Trinidad and Guyana. Sometimes it's hard to tell where that door is until it slams shut in your face.

Visual cliches about "indigenous" peoples may seem in escapable, but Abigail Hadeed's "Guyana-Rupununi 1994" juxtaposes such images in ways that help us see them from a different angle. She is one of a new generation of Caribbean filmmakers, photographers, and video artists challenging the relationship between the viewer and the object viewed that we have come to expect in glossy magazine spreads about the region.

My only criterion for selecting the creative writing that makesup the rest of this issue was that it be by contributors whom readers are not likely to have encountered as "Caribbean writers" in other publications. Honor Ford-Smith's work with Sistren is well-documented. Few readers will have seen her poems, how ever, especially the new prose poems like "My Mother's Last Dance." Writers such as Kelvin James and Everton Sylvester usu ally are associated with American themes. But their sensibilities have been shaped by the Caribbean islands where they grew up, and it is important to read their work in this context as well. Jane King and Kendel Hippolyte remind us that there are poets in St. Lucia besides its famous Nobel laureate. Very few people, even in the Caribbean, think of the Bahamas, the Virgin Islands or Bermuda as part of the Caribbean literary loop. Yet, from political poetry to quiet, domestic fiction, I received more in teresting materials from these locations (thanks in part to the good offices of Sandra Paquet and the Caribbean Writers Work shop at the University of Miami) than from many other, more familiar, addresses. Nicolette Bethel, the Bahamian author of our lead story, is one such accomplished new writer. "Eating the Raccoon" will hold you spell-bound until its very last word. Cynthia James has been around for a bit longer, but her stories and poems make use of a form of Trinidadian speech that is less familiar to readers outside the region than the more fre quently heard Jamaican Patwah. The energy and symmetry of her work remind me of an exquisitely crafted carnival costume that comes to life only when the wearer dances in it. Although Erna Brodber's novels are well-known within Caribbean liter ary circles, they have had a very limited circulation in North America. The extract from her forthcoming Louisiana, included here, may be difficult to follow because of its allusive, elliptical style. But once its rhythms take over, a deeply spiritual sensi bility asserts itself.

Even in a double issue, space eventually runs out. Apart from a few poems by John Agard, Grace Nichols and Fred D'Aguiar, there is almost no work in this collection by Caribbean authors based in Britain or by some of the better-known poets writing out of Jamaica, Barbados or Canada. With any luck you will have heard about some of these writers through other conversations. Even without their inclusion, however, this issue may overwhelm. As you stagger out of the backroom, having consumed, so to speak, the literary equivalent of a joint, three rums and coconut water, half a plate of jerk pork and a leftover Big Mac—you may feel a twinge of cultural indigestion. That's okay. Tomorrow, when the hangover wears off, you can go back and linger over just one thing—this time something that you really, really like.

Soothe Me, Music, Soothe Me; Let The Tourist Play

Searching For a Way Out

Face of the Nation: Race, Nationalisms and Identities in Jamaican Beauty Pageants

BY Natasha B. Barnes

West Indian Drama and the Rockefeller Foundation, 1957-1970: Derek Walcott, The Little Carib and The University of the West Indies

Where the Remote Bermudas Ride

A Place of Learning

At Sea, Poetry by Fred D'Aguiar

Soothe Me, Music, Soothe Me; Let the Tourist Play,
Fiction by Cynthia James

Searching For a Way Out,
Non-Fiction by Christopher Cozier, six reproductions

Searching For a Way Out: Conflict of Interest,
Art by Francisco Cabral

Searching For a Way Out: Mancrab,
Art by Peter Minshall, with an essay by Christopher Cozier

Searching For a Way Out: Sculpture Caribbean Basin,
Art by John Stollmeyer

Searching For a Way Out: Outhouse,
Art by Francisco Cabral

Searching For a Way Out: Installation Once a Man,
Art by Guy Beckles

Face of the Nation: Race, Nationalisims and Identities in
Jamaican Beauty Pageants, Non-Fiction by Natasha Barnes

West Indian Drama and the Rockefller Foundation,
1957-70: Derek Walcott, The Little Carib and the
University of the West Indies,
Non-Fiction by Bruce King

Where the Remote Bermudas Ride, Fiction by Angela Barry

A Place of Learning,
Fiction by Kelvin Christopher James

Why Does He Always Whistle That Tune While
Washing The Car, Cover Art by Christopher Cozier,
mixed media