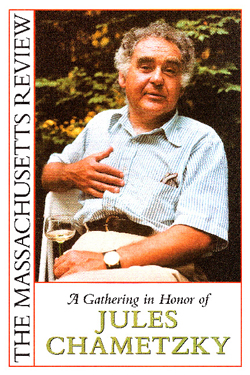 A Family Photograph, Brooklyn, 1942,
with commentary, Non-Fiction by Jerome Liebling

Jules Chametzky's Memo (October 23, 1958) From
Which Sprang the Massachusetts Review,
with a note by David R. Clark

For Jules, In Appreciation,
Non-Fiction by Esther Terry

A Brief History of CCLM/CLMP,
Non-Fiction by Pauline Uchmanowicz

Oriki: Ancestors and Roots, Non-Fiction by Kwame Ture
From the autobiography 'Ready for Revolution: The Life and
Struggles of Stokely Carmichael (Kwame Ture)' by Stokely
Carmichael with Ekwueme Michael Thelwell

From Race and Class to the Feminist Press,
Non-Fiction by Florence Howe

Contraband Guides: Twain and His Contemporaries on
the Black Presence in Venice, Non-Fiction by Paul Kaplan

The Intellectual as American: Richard Rorty on
"Achieving Our Country", Non-Fiction by
Alan Trachtenberg

That Much Credit: Irish-American Identity and Writing,
Non-Fiction by Shaun O'Connell

"The riffs, runs, breaks, and distortions of the music of
a community in transition"-- Redefining African Modernism
and the Jazz Aesthetic in Langston Hughes' 'Montage of a
Dream Deferred' and 'Ask Your Mama',
Non-Fiction by Dr. Gunter Lenz

Henry Hurwitz, the 'Menorah Journal', and the Last Years
of an American Romance, Non-Fiction by Lewis Fried

20 Questions I wish I'd asked my Father,
Poetry by John Felstiner

The Confusion About What It Means To Be Human;
Fourth of July on the Deerfield,
Poetry by Carol Potter

The Way God Must Feel; Atlantis,
Poetry by Val Vinokurov

The Eye, Poetry by Adrienne Rich

I Never Meant to Harm Him, Poetry by James Tate

All We Have, Poetry by Ellen Dore Watson

The Distant Town of Luniniec,
Poetry by Melvin Wilk