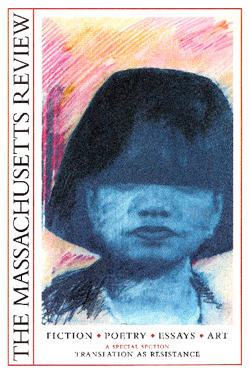 IN THIS ISSUE we present Translation as Resistance, a special section edited by Maria Tymoczko. Translation theory was once an arena for linguistic quib bling and sardonic double-entendres about fidelity But with the postmodern conviction that language and reality are one and the same came the recogni tion that translation marks a borderline where political power—and not mere semantics—is contested. This new and radical view creates a synergy with postcolonial studies, since language has always been a factor in the exercise of hegemony by dominant cultures, as it is a factor in resistance by those they seek to dominate. To complement these speculations we invite you to see Gordon Thome's visual translation of Condoleezza Rice into DarthVader—and back again.

Some good-byes: Corwin Ericson, our managing editor for more than five years, is moving on. Cory saw the magazine through its period of tran sition from the mechanical to the electronic age. Beyond reorganizing many of our aging systems, he has also been a wise judge of quality and relevance in editorial matters.

We also mark the end of our four-year adventure in radio. MR2 went off the air at the end of August. It has been a valuable experience, not only because of the wonderful guests we interviewed, but also as a collaboration with WMUA. Thanks go to Roger Fega, whose tireless co-hosting and co producing created a perfect environment for unscripted conversation.

Oxbow Press, printers of MR's covers, inserts, and broadsides for decades, have closed their doors, casualties of a world that can't tell the difference between fine art and digital simulacra. All our best wishes go to Gail Alt and Roberta Bannister, whose work could and should fill a museum.

And hellos: Katie Winger, our new managing editor, is a Smith College alumna currently completing an MBA at UMass. At the Northampton design studio Impress she gained wide experience in production, working on projects for Disney magazines, among many others. We also welcome back Bob Dow, poet and peace activist, as Associate Editor for fiction. And finally, for this issue's cover and insert we begin working with The StucUey Press, a well known fine arts printer based in Dalton, Massachusetts.

David Lenson
for the editors

Dolphins Dancing Somewhere off the Coast of Cuba

Jacob Wrestling All through the Night

Literary Translation and the Construction of a Soviet Intelligentsia

The World Is but a Place of Language

Dolphins Dancing Somewhere off the Coast of Cuba,
Fiction by Nate Haken

Jacob Wrestling All through the Night,
Poetry by Ellen Wehle

Biarritz, Poetry by Oliverio Girondo,
Translated from the Spanish by Daniel Coudriet

Literary Translation and the Construction of
a Soviet Intelligentsia, Non-Fiction by Brian Baer

Studies for the Woman—Condi & The Search for
a Newer World Order, Art by Gordon Thorne

The World Is but a Place of Language,
Poetry by Marlys West

Cheer Me Up, Pony-Dog, Poetry by George Shelton

Ago, Poetry by Allan Peterson