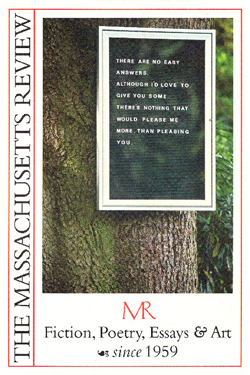 HISTORY IS A TRAP. President Bush, with his blowtorch gaze on Iran, utters the magic words "World War III," and we had better get behind them. The desire to avoid World War III is "cut and run," and can only give comfort to the enemies of peace, freedom, and democracy. We must not stand down from our mission, which is to kill a lot of people, if not all of them.

But this takes troops. An invasion of Iran means conscription. It's in my students' eyes, their growing anxiety about a war that, for them, is not only endless but beginningless. It started when they were preteens, a trap history laid for them.They have nowhere to hide: surveyed prenatally by ultrasound, and then by baby monitors, and then by security cameras everywhere, these kids are on the spot. Who else is left to go to Iran?

There is a flaw in human nature that causes our weapons to fire themselves, that makes us build eyes to stare back at us, that uses ingenuity to end ingenuity. Dylan Thomas wrote, "The force that through the green fuse drives the flower/Drives my green age; that blasts the roots of trees/Is my destroyer." Death and Eros wind into a Möbius strip. It is how we are made.

Let's not say: "We have seen it all. We have seen the end of the world and lived through that. Get over it.You'll die and then return to your work and shopping. The serpent pupil that stares at you in the dark cares for you deeply.You'll have robots and inconceivable toys."

Let's say something else. Like:"History is not a trap." Whether or not it's true.

David Lenson
for the editor

Incantation to Raise the Dead

King of the Gypsies

Lady Macbeth in the Caucasus

Traffic of Our Stage: A Moon for the Misbegotten

The Artist Wears Rough Clothing and Carries Jade Inside

You Get to Hold

Something Special In The Air

For the Sightsingers, Poetry by Muriel Nelson

The Skeleton, Fiction by Wendy Rawlings

Incantation to Raise the Dead,
Poetry by Brian Hayter

King of the Gypsies, Fiction by Lenore Myka

Lady Macbeth in the Caucasus,
Poetry by Katherine Young

Traffic of Our Stage: A Moon for the Misbegotten,
Non-Fiction by Normand Berlin

Not Quite Like a Raisin, Poetry by Maya May

The Artist Wears Rough Clothing and
Carries Jade Inside, Fiction by Robert Wexelblatt

You Get to Hold, Poetry by Donald Morrill

Something Special In The Air,
Non-Fiction by Cassandra McGovern