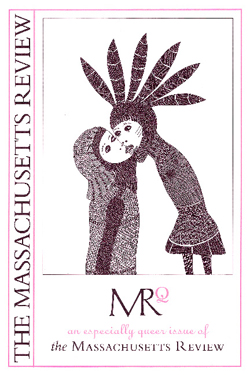 NOWADAYS it is not uncommon to hear about the "twilight" or "end" of "queer theory," "queer studies," or more to the point, the salience of the term "queer" itself. Certainly, the academy, in all its homophobic splendor, has gone about making this appear plausible. I don't entirely blame the academy, of course, since everyone blames it for everything—in this case, it is the mere suntan reflector of culture.

What I found when sending out shy tentacles for this volume was that wonderful talents and minds were responsive to the call of "queer " What might this mean? Well, first it means that the term is not necessarily yoked to the academy—in fact, we must remember that queer didn't come from academics but from activists. And amid those activists: poets, fiction writers, video artists, theorists of many stripes, historians, essayists, and lumping them all together in a category: thinkers, feelers, and, well, writers. Academics of the sort god loves made "queer" more articulate and articulable. Artists, thinkers, and activists of many stripes vibrated very pleasantly to the term for over twenty years before we were told that the garage door was closed, the car parked, and us, sitting in it, idling.

My experience of assembling this group of writers and artists was that "queer," above all, presently, means ALIVE: inventive, thoughtful, artful, delighted and delightful. Also, it means a whole lot about collaboration. Somehow, queers seem to do collaboration really well: witness the various conversations, from Ali—Isaac, Ashbery—Brainard, Butler—Durnrn, Sedgwick—Snediker, to the lovely and weirdly interchangable vocality of Johnson—Bordowitz.

These writers and artists are my very favorite (I guess I have to admit it), and it fills me with delight to have them in one place where, under my bedside lamp, I can thrill to their voices. I hope that one terrible consequence of this volume is that bedside lamps are burning much, much, much later than they would "normally." If this is the sort of thing we have to look forward to after a bright day or even after a twilight, I envy us.

John Emil Vincent
for the editors

For All the Freaks of the World

Studies for My Lincoln

Every Queer Thing We Know

Giving Away, Giving Over: A Conversation with Judith Butler

By Judith Butler and Thomas Dumm

Moments of Shared Glamour: A Conversation

By Gregg Bordowitz and Liza Johnson

Moments of Shared Glamour: A Conversation

By Gregg Bordowitz and Liza Johnson

A Portrait of the Artist as a Young Landscape

The City of Boston

Here Comes the Kiss: A Conversation between Laylah Ali and Allan Isaac

For All the Freaks of the World,
a poem by Rafael Campo

from The Vermont Notebook, a collaboration
between John Ashbery and Joe Brainard

My Friend Goo, a story by Shelley Jackson

Studies for My Lincoln, art by Lee Gordon

Every Queer Thing We Know,
essay by Lisa Henderson

Giving Away, Giving Over: A Conversation with
Judith Butler, by Judith Butler and Thomas Dumm

Moments of Shared Glamour: A Conversation,
by Gregg Bordowitz and Liza Johnson

Homosexuality; A Portrait of the Artist as a Young Landscape, "The city
of Boston. . .", poems by Jack Spicer

Here Comes the Kiss: A Conversation between
Laylah Ali and Allan Isaac, art by Laylah Ali

Play/Replay, a poem by Frank Bidart