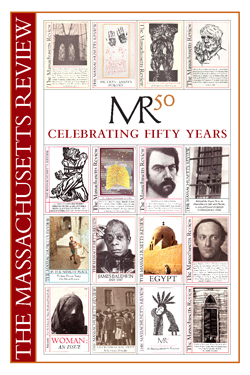 The Birth of the Poem

The Birth of the Poem

Climbing Toward the Peaks

Notes on the Mono-Culture

You Can't Tell a Book by Its Cover?

A Conversation with Cornel West

By Thomas Dumm and David Lenson, With Cornel West

Ask ZZ if You Don't Believe Me

I Like Aluminum Foil for It Has No Emotions

On Being Asked What Result of Racism Would You Have Difficulty Giving Up?

The Ghost of Stephen Foster

The Years Between Wars

The Day We Buried You in the Park

Richard Dawkins: My Encounter with a Heartthrob

Where Are You Now?

The Wisdom of Solomon

This Morning I Pray for My Enemies

Love Is the Crooked Thing

I . Ends and Beginnings

The Americans, a story by  Lê Thị Diễm Thúy

The Birth of the Poem, a poem by Adélia Prado,
translated by Ellen DoréWatson

Climbing Toward the Peaks, a poem by Robert Bly

Notes on the Mono-Culture,
an essay by Mark Edmundson

Pomegranate, a poem by Marilyn Hacker

You Can't Tell a Book by Its Cover?,
an essay by Grace Glueck

July 12, 2006, a poem by Vénus Khoury-Ghata,
translated by Marilyn Hacker

Foghorns, a poem by Tony Hoagland

Music Is Force, an essay by Arun Saldanha

People's Politics: Amiri Baraka, Hip-hop,
and the Dialectical Struggle for a Popular
Revolutionary Poetics, an essay by Casey Hayman

Rain, a poem by Rita Dove

Ask ZZ if You Don't Believe Me, a story by Elizabeth Denton

I Like Aluminum Foil for It Has No Emotions,
a poem by Dara Wier

No Name Commune, a memoir by Marianne Boruch

On Being Asked What Result of Racism Would You
Have Difficulty Giving Up?, a poem by Aracelis Girmay

Stolen, a poem by Shira Erlichman

My Love is Like Oh, a poem by Christopher Kang

God, a poem by Amy Leach

The Ghost of Stephen Foster,
a story by Aaron Hellem

The Years between Wars,
a poem by Steve Orlen

The Door Man, a story by Lisa Vogel

Yakov, a poem by Philip Levine

The Day We Buried You in the Park,
a poem by Martín Espada

VI. I Carried the Things I Loved in a Red Sack

At the Pitch, a poem by Maxine Kumin

Richard Dawkins: My Encounter with a Heartthrob,
an essay by William Giraldi

Where Are You Now?, a poem by Naomi Shihab Nye

The Wisdom of Solomon, a poem by Brigit Pegeen Kelly

This Morning I Pray for My Enemies, a poem by Joy Harjo

Apples and Angels, a story by Elizabeth Collins

Value, a poem by Christopher Howell

Love Is the Crooked Thing, a story by Stephen O'Connor