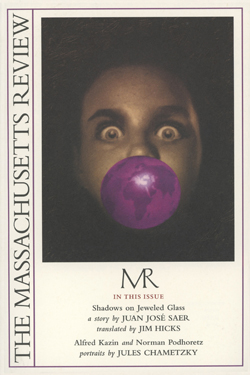 FIFTY YEARS GO QUICK. I know this intimately—MR and I were actually born together, in the fall of 1959. But they have had their moments. Just ten years into the fray, for example, the editors of this journal published a superb anthology of essays, art, poems, and stories, Black & White in American Culture, featuring writing by Martin Luther King, W.E.B. Du Bois, Lucille Clifton, Howard Zinn, Stokely Carmichael, Toni Cade, and Jean-Paul Sartre. The collection also saluted Ralph Waldo Emerson, citing as preface his 1847 missive from the first issue of the Massachusetts Quarterly Review. "What more serious calamity can befall a people than a constitutional dulness and limitation?" Emerson wrote. "We have a bad war, many victories, each of which converts the country into an immense chanticleer; and a very insincere political opposition. This country needs to be extricated from its delirium at once." Hard not to hear Emerson as doubly relevant today, certainly no less than he was fifty years ago. And yet he, like us, retains faith in the power of the word: "A journal that would meet the real wants of this time must have a courage and power sufficient to solve the problems which the great groping society around us, stupid with perplexity, is dumbly exploring."

MR may not solve these problems, but neither will it shrink them. It is clear that what Du Bois famously called "the problem of the twentieth century" is still very much with us; indeed, the great global migrations of our own day have made new Harlems, and new color lines, across nearly every great city on earth. And yet the people of this country still learn their geography, if at all, by following the follies of our military caste. To no small degree, then, the current national delirium stems from ignorance: whatdo we really know of other places, other peoples, other perspectives? There are things which literature and the arts teach us that can be learned no other way; not least of these is another life, another world, from the inside. As a step toward extrication, and away from delirium, MR will begin its second half century by dramatically increasing the amount we publish in translation. Our government has been broadcasting The Voice of America for well over fifty years; it's high time that the country opened its ears as well as its mouth. To that end, some changes to the masthead: Edwin Gentzler, head of the Translation Center at UMass, will be joining Ellen Doré Watson as Translation Editor; Michael Thurston, professor of English and American studies at Smith College and an incorriible internationalist, will be added to the Editor ranks; and Charles M. Sennott, co-founder of the Internet news service GlobalPost.com, will be joining the review as Contributing Editor. And, beginning this year, the journal will also award annually a new literary prize for translation, the Jules Chametzky Prize to the single best translations, in prose and in poetry, published within our pages.

Jim Hicks
for the editors

Crazy in Love (Women and Shoes)

What I Learned in Art School

Everywhere and Nowhere: A Quest for Tango in Buenos Aires

The Approximate Placement of the Sun

Time and Language: The Trials of a Philosophical Tourist

Pantoum of the Brothel of Ruin

A Man from the Lord

Psalm of Leah, a poem by Diane Gilliam

My Soul, a poem by John Allman

Ex-Wives, a poem by Ira Sadoff

Saffron, an essay by Robert Kostuck

From Le Spleen de Poughkeepsie,
a poem by Joshua Harmon

The Atheists Club, a story by Philip Kobylarz

Jackpot, a story by Kelly Luce

Crazy in Love (Women and Shoes),
an essay by Cynthia Lewis

What I learned in Art School, an essay by Joy Manesiotis

Building, an essay by Michelle Disler

Insulatus, an essay by Zachary Watterson

Your People's Ways, a story by Jane E. Martin

Polaroids of Tom, an essay by Burlee Vang

A Kingdom Comes, a story by Nance Van Winckel

Waiting for Solomon, a story by Susi Wyss

Everywhere and Nowhere: A Quest for Tango
in Buenos Aires, an essay by Paige Boncher

The Approximate Placement of the Sun,
a story by Lauren Foss Goodman

Time and Language: The Trials of a Philosophical Tourist,
an essay by Frederic Will

Pantoum of the Brothel of Ruin,
a poem by Patrick Donnelly

The Nutcracker's Overbite, a story by Peter Moore

A Man from the Lord, a poem by Kirun Kapur

Beer, a poem by Lee Upton

Until death do us part, by Anur

Consumerism is a trap, by Anur