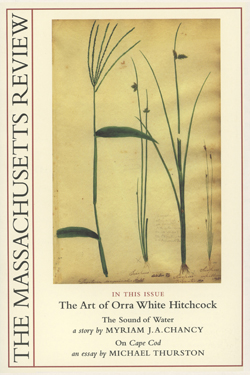 At times, the absurdity of the so-called news cycle feels like an obscenity. A matter of distance, really. Could it ever feel less than obscene when the subject of the news is you? The point was brough home—literally—on an evening in late January, when Myiam Chancy, former editor of Smith College's Meridians, returned to the Happy Valley. Myriam gave a reading from her new novel, The Loneliness of Angels, at a benefit for Haiti (at Food for Thought, a bookstore in Amherst); a host of others decried, declaimed, jammed, and sang that night as well, including MR's own Martín Espada, and all enchanted, but the prophetic voice that most entranced was found in "The Sound of Water." We are honored to republish it here, and we trust that Haiti will stay in the minds, words, and deeds of our readers.

Enchantment, to a different beat, is also sung in Cleopatra Mathis's "Calypso"—surely "the right poison/to make a proper lament." Michael Thurston's capewalk picks up where Calypso lets go: another seaside meditation on ruin, Thurston launches his essay into Thoreauviana, teaching us to sort as well as salvage. In the fullness of time, who among us will be spared the cold, the scarcity , "the sudden losses occasioned by predation"? Though Thoreau, as "On Cape Cod" reminds us, stared down the emptiness we too quickly call charity, no other word seems adequate to the periods measured by Thurston's pace and phrasing.

Geological time has yet another rhythm—the earth's time both is and is not our own. The art and life of Orra White Hitchcock, as meticulously recounted in Daria D'Arienzo's "The 'Union of the Beautiful with the Useful,'" sings a praisesong for the natural world, and her accomplishments have yet to be valued fully, even by those institutions which the Hitchcocks—both Orra and her husband, Edward—helped bring to national prominence. Though daughter, wife, and mother, Orra was most of all "an artist and a passionate scientist, a person capable of [. . .] creat[ing] an illustrated life of her own." Time to set the record straight.

Let me end by sending you to your libraries. In Another Way of Telling, John Berger gives us a lyrical, moving commentary on the Hungarian photographer André Kertész's "A Red Hussar Leaving, June 1919, Budapest." This photo shows a woman holding a small child; she faces a soldier with his back to us, a crowd surrounds them. According to Berger, though we may sense it, we cannnot understand the power of this image unless we know that the soldier is leaving to join a doomed struggle, that of the Hungarian Red Army. This defeat led to the occupation of Budapest, and, "very soon after, the first European fascist regime under Horthy was established." For Berger, the lesson of this photograph is contained in "the parting look between the man and the woman": in it is a resistance—an opposition—to history. A protest "against people being the objects of history," a gesture in which "history ceases to have the monopoly of time."

How could this be? A lovely phrase, yes, but does it make sense? How could history not be equated with—not have a monopoly over—time?

Only if other histories are possible.
—Jim Hicks
for the editors

Decomposition of the Soul

The Sound of Water

I Thought It's Time

The "Union of the Beautful with the Useful": Though the Eyes of Orra White Hitchcock

Mercy Flynt Morris and Nancy Flynt: A Portrait of Two Massachusetts Sisters in the Early Republic

Ode to th Boulders in the Orchard

Decomposition of the Soul, No Complaint Book, and Divine Caress

Decomposition of the Soul, No Complaint Book,
and Divine Caress, poems by Rosa Alice Branco,
translated by Alexis Levitin

The Sound of Water, a story by Myriam J.A.Chancy

On the Training of Expert Witnesses,
a poem by G.C. Waldrep

On Cape Cod, an essay by Michael Thurston

Calypso, a poem by Cleopatra Mathis

I Thought It's Time and Diana,
poems by Jean Valentine

Proof, a poem by Barbara Perez

Having It All, an essay by Robert Erwin

The "Union of the Beautiful with the Useful":
Through the Eyes of Orra White Hitchcock,
an essay by Daria D'Arienzo

Mercy Flynt Morris and Nancy Flynt:
A Portrait of Two Massachusetts Sisters
in the Early Republic, an essay by Jessica Lang

Ode to the Boulders in the Orchard,
a poem by Teddy Macker

Guests, a story by James Meyer

Against the Dying, a story by Wilson Roberts

Toni Morrison, the Slave Narratives, and Modernism,
an essay by Robin Dizard