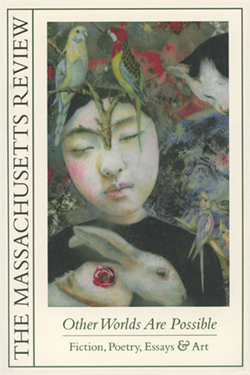 If you've ever owned a PC, you've done it. Desperate to get some work done, despairing of what might already be lost, furious at the minutes slipping by, you stare at a paralyzed screen. Finally you pull the plug, you strip the battery, you make it somehow stop, by any means necessary. And then, because a roll of the dice will never abolish chance, you hit the switch again, anxiously observing the codes displayed as your machine reboots.

An odd word, that . . . a quick dip into the OED finds "boot" alone with eight separate listings. You are not surprised to find "to boot" in the sense of "[t]o make better; to cure, relieve, heal; to remedy" (obsolete since the Middle Ages). You also find relevance in another sense of "boot," an "instrument  of torture formerly used in Scotland to extort confessions from prisoners." Oddly satisfying as well, though illogical, "reboot" apparently predates "boot" in reference to computer operations; both derive from "bootstrap routine" or "technique": "[t]he procedure of using a fixed sequence of instructions to initiate the loading of further instructions and ultimately of a complete program"—in short, a machine pulling itself up by its own bootstraps.

Real bootstraps, of course, never got anyone anywhere. Imagine Chaplin or Keaton yanking on his bootstraps, pulling up first one leg then the other, then finally both at once, only to end up upended, staring in surprise at the stars. Rebooting is the computer-age equivalent of banging on the TV set, back in the day, before solid state. It did work, sort of, for a while anyway, and it certainly made you feel better. Even if it ultimately made things worse.

So what's the alternative? To reprogram, or, since we're not really talking machines here, to rethink things. From the ground up. Or from the other side of the horizon. Not so many years ago, in their anthropological study at the Salk Institute, Bruno Latour and Steve Woolgar offered a rather startling definition of genius. Eavesdropping. Paradigms shift when a scientist overhears something useful being done elsewhere, and then figures out that it might solve other problems too. Yet another argument for reading in translation.

We guarantee it: studying this issue from cover to cover will do you better than any old-fashioned thump on the noggin. C.K. Williams certainly whacked us a good one, and the gothic maternity tales of Takako Takahashi haunted our world for days, or longer. Q.M. Zhang's accomplished memory work marks her as a rising star; Martín Espada's love for subversive poetry guides us through the literary history of Puerto Rico, one constellation at a time. The poets, come to think of it, offer here a whole menagerie beyond mere humanity: Doug Ramspeck a horse, Lisa Bellamy a monkey, and Stanislaw Borokowski wolves. Semezdin Mehmedinović and Miljenko Jergović triangulate their lives, literatures, and losses by emptying out their post-Bosnia mailbag, whereas Haim Isaacs shows us the new Paris, a rearwindow viewing. We also bring you literary history from three separate countries: Argentina's surrealist superhero, from the pen of Edar Bayley, Mela Hartwig's story of a fascist-era everywoman, and a classic dreamworld rant from André Breton, in a new translation from A.F. Moritz and our own David Lenson. Summer McClinton's graphic Bogdaniad brings us home in style—more proof that the art of listening is a rare bird indeed.

In a word, multicentric. Multiple occasions to move beyond a simple reboot
—Jim Hicks,
for the editors

A Womb of One's Own: Takahashi Takako's Women Apart

The Lover of a Subversive is Also a Subversive: Colonialism and the Poetry of Rebellion in Puerto Rico

Ten Years of Apprenticeship in the Republic of Carnivorous Loves

By Kerri A. Pierce

My Week with Bogdan

The Gospel of the Gospel

The Way to Smith College, a poem by Ko Un,
translated by Lee Sang-Wha

Whacked, a poem by C.K. Williams

A Boundless Void, a story by Takahashi Takako,
translated by Amanda C. Seaman

A Womb of One's Own: Takahashi Takako's
Women Apart, an afterword by Amanda C. Seaman

17 Movements in Spring, a poem by David Welch

Accomplice to Memory, a story by Q.M. Zhang

In a half-mile, the highways cross...,
a poem by Tomas Venclova, translated by Rimas Uzgiris

Afterlife and Snow and the Wolves, poems by
Stanislaw Borokowski, translated by Chris Michalski

The Lover of a Subversive Is Also a Subversive:
Colonialism and the Poetry of Rebellion in
Puerto Rico, an essay by Martín Espada

Ten Years Apprenticeship in the Republic of
Carnivorous Loves, a poem by Kara Candito

Monkey Spinning a Prayer Wheel,
a poem by Lisa Bellamy

The Bridge Named Desire, a story by Dario Dzamonja,
translated by Aleksandar Brezar

Risk, a poem by Katherine Larson

Pap, a poem by Carolyn Creedon

Zouhira, a story by Haim Isaacs

Am I a Redundant Human Being?, a novel excerpt
by Mela Hartwig, translated by Kerri A. Pierce

Selections from The Life and Memoirs of Doctor Pi
and Other Stories, stories by Edgar Bayley,
translated by Emily Toder

My Week with Bogdan, a graphic story by Summer McClinton

The Gospel of the Gospel, a poem by Michael Chitwood

EDGAR BAYLEY (1919-1990) was an active and influential participant in avant-garde Argentine poetry, representing a major figure in its literary magazines and institutions throughout the latter half of the last century, and was among the founders of the invencionista movement that swept Buenos Aires and beyond in the 1940s and '50s. Poet, playwright, director, translator, and essayist, he was the author of over fifteen published works. The Life and Memoirs of Doctor Pi and Other Stories (Clockroot Books, 2010), from which these stories are excerpted, is the first translation of his work into English.

LISA BELLAMY's poems have appeared in TriQuarterly, New Ohio Review, The Sun, Fugue, Tiferet, PANK, Harpur Palate, and other magazines. She received Pushcart Prize nominations in 2009 and 2008, and won the Fugue Poetry Prize in 2008. She graduated from Princeton University and studies with Philip Schultz at the Writers Studio in New York City, where she also teaches.

Born in Warsaw under the Communist regime, STANISLAW BOROKOWSKI emigrated to Vienna as a child and has lived there ever since. His work has been featured in numerous journals and anthologies, and his first volume of poems was released in 2007. Until it was discontinued in January 2009, his blog Briefe an Michail Gorbatschow enjoyed a cult following among German-language readers.

ANDRE BRETON (1896-1966) was a French poet and theorist, known as "The Pope of Surrealism." "Fata Morgana" was written in Marseilles in 1940 as Breton was awaiting passage to the United States after the Vichy government banned his work.

ALEKSANDAR BREZAR was born in 1984 in Sarajevo. He has worked as a journalist for Radio 202, a cult radio station in Sarajevo, and as an interpreter for the United States Holocaust Memorial Museum in Washington DC and the Sarajevo Film Festival.

KARA CANDITO is the author of Taste of Cherry (University of Nebraska Press), winner of the 2008 Prairie Schooner Book Prize in Poetry. Her poems and reviews have appeared or will appear in such journals as AGNI, Blackbird, Kenyon Review, and Best New Poets 2007. She has received awards for her poetry, including an Edward H. and Marie C. Kingsbury Fellowship, an Academy of American Poets Prize, and scholarships from the Bread LoafWriters' Conference.

MICHAEL CHITWOOD's poems have appeared most recently in The Atlantic Monthly, Poetry, Threepenny Review, Field, Crazyhorse, Oxford American, and numerous other journals. He is the author of six poetry collections.

CAROLYN CREEDON has been a diner waitress, a college teacher, and other incarnations for fifteen years, from Virginia to San Francisco to St. Louis and back again. She lives in Charlottesville at present with her partner and her little black dog. She'd very much like a job.

DARIO DŽAMONJA was born in 1955 in Sarajevo. He left Sarajevo in 1993, eventually settling in the United States as a political refugee. The short story published in the Massachusetts Review comes from a collection entitled Letters from a Madhouse (Pisma iz ludnice) (2000) in which Dzamonja describes his experiences as a refugee and his eventual deci sion to return to Sarajevo, where he died in 2001.

ATHENEA N. EDMONDS recently graduated from Lesley University with an MFA in creative writing. She teaches poetry to inmates at MCI Concord in a program she co-founded. In her previous life, she founded and managed a series of early-stage software venture funds. Apart from her MFA, she holds engineering degrees from MIT and Cambridge University. Originally from Thessaloniki, Greece, she lives with her husband and four children in Belmont, Massachusetts.

FRANK ESPADA was born in Utado, Puerto Rico, in 1930 and with his family migrated to New York City in 1939. He attended the New York Institute of Photography there, but having to support a family, worked for an electrical con tractor until he became involved in the Civil Rights movement in 1969, working for a com munity action program, the City-Wide Puerto Rican Development Program. In the early 1980s, he completed work on his book The Puerto Rican Diaspora. He later moved to San Francisco, where he taught photography at the University of California-Berkeley's extension program.

MARTÍN ESPADA has published seventeen books in all as a poet, editor, and translator. His collec tion of poems entided The Republic of Poetry (Norton, 2006) received a Paterson Award for Sustained Literary Achievement and was a finalist for the Pulitzer Prize. A collection of essays, The Lover of a Subversive is Also a Subversive, is forthcoming from Michigan in 2010, and his next collection of poems, The Trouble Ball, is forthcoming from Norton in 2011. He has received numerous fellowships and awards, including a Guggenheim Fellowship and the National Hispanic Cultural Center Literary Award. Espada teaches at the University of Massachusetts Amherst.

TESS GALLAGHER is the author of eight volumes of poetry, including Dear Ghosts, Moon Crossing Bridge, and My Black Horse. Midnight Lantern: New and Selected Poems will appear Fall 2011 from Graywolf. Gallagher spends time in a cottage on Lough Arrow in County Sligo in the west of Ireland and also lives and writes in her home town of Port Angeles, Washington.

HENRIETTA GOODMAN's first book of poetry, Take What You Want, was published in 2007 by Alice James Books. Her poems have recendy appeared in Valparaiso Poetry Review, Guernica, Field, and other journals. She lives in Lubbock, Texas, where she is a student in the PhD program in English at Texas Tech University.

LORI FIELD's art work appeared on the cover of the Mass Review's previous issue (MR #5103). She is primarily self-taught and works specifically and deliberately with tools and mediums that are archaic and rare, putting a contemporary spin on the work through its' content. Her work is in the collections of several museums in the US, the Montclair Art Museum, the Brodsky Center for Innovative Print and Paper, and the Newark Museum among them. She has shown in New York City, Berlin, Miami, Nashville, Denver, Chicago and Los Angeles, and is represented by Claire Oliver Gallery in New York Ciy. She lives in Montclair, New Jersey.