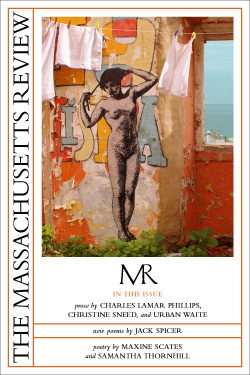 LET'S VENTURE to vary an old saw. It may well be that only those who know their history are capable of repeating it. No more than any of you, of course, did we see foresee the staggering events still ongoing in North Africa and the Middle East. From the outside, we invariably fail to imagine what history does not. Not even on that memorable afternoon in Amherst, November 19, 2010, when—in celebration of forty years of revolutionary scholarship from the University's W.E.B. Du Bois Department of Afro-American Studios (est. 1970) and to commemorate fifty years of revolutionary struggle since the founding in 1960 of the Student Nonviolent Coordinating Committe—three seminal participants in the revolution came together in order to share their memories and instruct us all, not even then was it conceivable that the inspiring history they spoke of would in less than a month's time ignite again in Tunisia and burn through North Africa and the Middle East. Who were the members of SNCC? According to Ekwueme Michael Thelwell, they were "young people who would jeopardize their education and place their lives at risk in the interest of justice and fairness and decency, and who performed in that way with such consummate creativity as to be able to significantly transform the history of that time." Do tell—and tell us what in these words is not applicable today to the youth of Tunisia, of Egypt, and beyond? As the cantautore Francesco De Gregori puts it,

history never really stops before the main door
it comes inside the rooms, it burns them
history decides wrong, and right
(my translation)

The Massachusetts Review proudly reprints here the talks by SNCC members Thelwell, Charles Cobb, and Judy Richardson and shares in their celebration and commemoration.

Elsewhere in this issue, our history follows similarly inventive twists and turns. Thanks to John Emil Vincent, we bring you a series of unpublished poems from Jack Spicer—the San Franciscan's transmigratory homage to Abner Doubleday. Elizabeth Hoover retraces the trail of colonial arrogance and power, and Charles Lamar Phillips ives us a chilling resurrection of McCarthyist fervor. Elsewhere, Urban Waite spins a reductio ad absurdum tale of Texas Tea partying, and Stacey Waite reminds us of our inner primate lives. And since no one can refuse refuse, we;ve also invited Vicky Spelman in to talk some trash. And that's just a short list, with plenty of treasure still sitting on the sidewalk.

The Review also enthusiastically welcomes Aracelis Girmay to our masthead, as a Contributing Editor; in this issue, Aracelis introduces Samantha Thornhill to our readers, and reminds us what it means to speak truly—as Roland Barthes liked to say—de son corps.

Your summer reading, to sum it up, is contained within a pair of geopolitical bookends—with plenty of room for meditation, and for manoeuvre, in between. We move to a close through a pair of essays by Herbert Bix and Jon Western, two scholars who demand we think long and hard about our role in all of this.

And then, finally, jubilation. A communiqué from Egypt's Liberation Square on the brilliant night of February 11, 2011: drafted by flashlight on cardboard in a tent, written by a coalition of representatives from five leading youth groups, sent out to the world on Facebook and Twitter, and witnessed by MR Contributing Editor Charles M. Sennott. Surrounded by Abrams tanks, these long-suffering victims of a militarized dictatorship, these unarmed yet unstoppable kids actually managed to turn an army—at least for an instant—into the face of a free nation. In his Frontline special, Charlie comments that the Egyptian revolution was the single most exciting story he'd ever covered, in all his twenty-five years of reporting. "[A] feeling shared by a lot of veteran Middle East correspondents," he adds. "We've spent years covering war, insurgency, corruption, and terrorism, and we've all waited for the moment when the people who live under the Arab world's corrupt, despotic reimes might rise up and rewrite their own history." Now then, we think to ourselves, who wouldn't like to bring that story home?

SNCC, the Struggle, and the W.E.B. Du Bois Department

The Virgin of Candelaria

How to Survive on Canned Peaches

Protecting States or Protecting Civilians: The Case for R2P

On the Training of Expert Witnesses

SNCC, the Struggle, and the W.E.B. DuBois Department:
An Introduction for Charles E. Cobb, Jr., and Judy Richardson,
by Ekwueme Michael Thelwell

Womanpower and SNCC, an essay by Judy Richardson

The Fates, a poem by Maxine Scates

Upon Hearing a Child Call You Old,
a poem by Samantha Thornhill

1 Corinthians 13, a poem by Spencer Reece

Before Bees, a poem by Marina Hope Wilson

Shift, a poem by Aubrey Lenahan

Banana, an essay by Eleanor Stanford

The Virgin of Candelaria, a story by Ruth Taylor

Prosthesis, or The Metamorphosis,
and Once Upon a Time, a King...,
stories by Vittorio Marchis, translated by Jim Hicks

The Republic of Curtis, a story by Urban Waite

Grozny, a story by David Torres,
translated by Daniel Nevarez

How to Survive on Canned Peaches,
an essay by Nicole Walker

Combing Through the Trash: Philosophy
Goes Rummaging, an essay by Elizabeth V. Spelman

Motherhood, a poem by Adrian Blevins

The Monkeys, a poem by Stacey Waite

The North African-Middle East Uprisings
from Tunisia to Libya, an essay by Herbert P. Bix

Protecting States or Protecting Civilians:
The Case for R2P, an essay by Jon Western

A New Egypt, a declaration by
The Youth Coalition of the Egyptian Anger Revolt