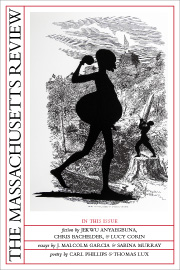 MANY THINGS CAN BE SAID about Kara Walker’s pictorial interventions into our national history, but no one will ever call them timid. At the Massachusetts Review, we’ve long admired her work, and her courage, so we’re pleased (as Punch) to share her with you here. We’re even prouder that the Museum at Mount Holyoke College — one of our Five College sponsors — has recently acquired the full fifteen-image suite of Walker’s Harper’s Pictorial History of the Civil War (Annotated), including our cover image.

All real art, and real writing, asks real questions, with no waffling allowed. So what do you stand for? What tests your faith? Where do you draw the line? How do you explain what you do all day, and what’s at stake in it for you? Is all of this mere make-believe? A teacher in Eduardo Halfon’s Polish Boxer does his level best to cheerlead, yet mainly preaches to the choir: “Fiction is funny that way, isn’t it? A story is nothing but a lie. An illusion. And that illusion only works if we trust in it. The same way a magic trick impresses us even though we know perfectly well that it’s a trick . . . Plato wrote that literature is a deceit in which he who deceives is more honest than he who does not deceive, and he who allows himself to be deceived is wiser than he who does not.”

In our Spring issue, prestidigitation abounds. Chris Bachelder declares global war against spindles, and Christine Sneed gives expert advice. Carl Phillips offers us correction, as well as a glimpse of his darker powers. We have visions of godzilla sex from Lucy Corin, under blankets of monstrous smog, and Jekwu Anyaegbuna tells his Nigerian tale of a woman in waiting. Thom Lux shows us how imagination makes history live, then Sabina Murray tells us how it’s done. Pete Duval adheres to the faith of his mother, and songs of/in translation are sung by Polina Barskova and Pavel Šrut. Finally we end in memory. J. Malcolm Garcia, displaced person by vow and vocation, retraces a solitary and saintly life, and Peter Balakian remembers his time and travels with poet and teacher Agha Shahid Ali.

In all of the above, and more, we trust you’ll find reason to believe. Even Halfon’s pupils, distractedly doodling their way through stories, stumble on occasion across Ariadne’s thread. In their case, a way out is offered by Ricardo Piglia. “The visible narrative always hides a secret tale,” the Argentine’s essay tells them. And Halfon’s narrator concurs: a great writer possesses “the ability to be saying one thing when in reality . . . expressing another, the ability to use language as a means of accessing a sublime, ephemeral metalanguage.” “It’s like the stars,” echoes a young poet in the back row, “the stars in the sky are the stars that we see, but they’re also something more, something we can’t see but that’s still there . . . . If we arrange them, they become constellations . . . which represent zodiac signs, which in turn represent each one of us.”

The Clock Hands of a Child

Christ in a Ditch

Gozxilla versus the Smog Monster

The Lost Meadows of Northampton

Nothing Went to Waste

The Princess Doctrine, a story by Chris Bachelder

The Darker Powers and Correction,
poems by Carl Phillips

The Waiting Stool, a story by Jekwu Anyaegbuna

Literary Imagination and Living History,
an essay by Sabina Murray

Godzilla versus the Smog Monster,
a story by Lucy Corin

Ghazal, a poem by Adam Scheffler

Adhesion, an essay by Pete Duval

Peau, a poem by Gillian Cummings

The Clock Hands of a Child,
a poem by Christopher Watkins

Ask an Expert, a story by Christine Sneed

Crow, a poem by CJ Evans

The Apartment, a story by Yoojin Grace Wuertz

The Lost Meadows of Northampton,
an essay by David Fleming

Christ in a Ditch, a poem by Laura Koritz

Nothing Went to Waste,
an essay by J. Malcolm Garcia

JEKWU ANYAEGBUNA won the 2012 Commonwealth Short Story Prize for Africa region. An alumnus of the Farafina Trust International Creative Writers’ Programme taught by novelist Chimamanda Ngozi Adichie, he has had his fiction and poetry published in many literary journals in the US, the UK and Hong Kong, including Granta, The Journal, Ambit, Orbis, Eclectica, Tipton Poetry Journal, Yuan Yang, among others. He graduated from the University of Ilorin. Jekwu lives and writes in Lagos, Nigeria, where he has completed a collection of short stories. He is currently at work on his first novel.

CHRIS BACHELDER is the author of the novels Bear v. Shark, U.S.!, and Abbott Awaits. He teaches at the University of Cincinnati.

PETER BALAKIAN's recent books of poems include Ziggurat (Univ. of Chicago, 2010) and June-Tree; New Selected Poems 1974-2000 (Harper Collins). His memoir Black Dog of Fate was recently issued in a 10th anniversary edition. He teaches at Colgate.

POLINA BARSKOVA, born in Leningrad in 1976, published her first collection of poems in 1991; her poems have been translated into English for literary journals, anthologies, and two solo volumes: This Lamentable City (Tupelo Press, 2010) and The Zoo in Winter: Selected Poems (Melville House Press, 2011). The present selection of translations by Catherine Ciepiela comes from the forthcoming anthology Relocations: Poetry by Maria Stepanova, Anna Glazova and Polina Barskova (Zephyr Press, 2013). Barskova teaches Russian literature at Hampshire College, in Amherst, Massachusetts.

CATHERINE CIEPIELA writes about and translates modern Russian poetry. She is the author of The Same Solitude, a study of Marina Tsvetaeva’s epistolary romance with Boris Pasternak, and co-editor with Honor Moore of The Stray Dog Cabaret, a book of Paul Schmidt’s translations of the Russian modernist poets. She teaches at Amherst College.

LUCY CORIN is the author of two books of fiction as well as the forthcoming story collection One Hundred Apocalypses and Other Apocalypses (McSweeney’s Books). She’s currently the John Guare Fellow in Literature at the American Academy in Rome. An early draft of “Godzilla versus the Smog Monster” was published in Gargoyle Magazine in 2005.

GILLIAN CUMMINGS’ poems have appeared or are forthcoming in The Laurel Review, Boulevard, the Colorado Review, Denver Quarterly, The Cream City Review and PANK. A chapbook, Spirits of the Humid Cloud, is due out soon from Dancing Girl Press. She holds an MFA from Sarah Lawrence College and teaches poetry workshops at a hospital.

PETE DUVAL is the author of Rear View: Stories. He teaches in Spalding University’s brief-residency M.F.A. program and lives in Philadelphia.

CJ EVANS is the author of A Penance (New Issues Press, 2012) and a chapbook, The Category of Outcast, selected by Terrance Hayes for the Poetry Society of America’s New American Poets chapbook series. His work has appeared, in journals such as Boston Review, Colorado Review, Indiana Review, Little Star, and Pleiades. He’s the editor of Two Lines Press a contributing editor for Tin House, and teaches in the MFA program at the University of San Francisco.

DAVID FLEMING is professor of English at the University of Massachusetts Amherst. He is the author of City of Rhetoric: Revitalizing the Public Sphere in Metropolitan America and From Form to Meaning: Freshman Composition and the Long Sixties, 1957-1974. He lives in Northampton, MA.

J.Malcolm Garcia is the author of Khaarijee: A Chronicle of Friendship and War in Kabul (2009), and Riding through Katrina with the Red Baron’s Ghost (2012). His articles have been featured in Best American Travel Writing and Best American Nonrequired Reading.

DEBORAH HELEN GARFINKLE is a writer, critic, independent scholar and translator living in San Francisco. Worm-Eaten Time: Poems from a Life under Normalization by Pavel Šrut 1968-1989 is Ms. Garfinkle’s second full-length translation from the Czech. Her first, The Old Man’s Verses: Poems by Ivan Diviš, was nominated for the 2008 Northern California Book Award. This year, in addition to earning the NEA Translation Fellowship for Worm-Eaten Time, she was awarded a Translation Grant from the PEN Center USA for her work on the collection. Selected translations from Worm-Eaten Time have been published in Two Lines and Tri-Quarterly Online. She is currently revising her intellectual history of the Czech Surrealist movement, The Surrealist Bridge: Czech Surrealism’s Interwar Experiment 1934-1938.

REBECCA POWELL LARTIGUE lives in western Massachusetts and teaches literature and composition at Springfield College. Last year the Springfield Cultural Council awarded her an Artist Fellowship in support of her fiction, which is primarily long-form. She is working on her second novel.

SABINA MURRAY grew up in Australia and the Philippines. She is the author of the novels Forgery, A Carnivore’s Inquiry, and Slow Burn and two short story collections, the Pen/Faulkner Award winning The Caprices and Tales of the New World. Her work is included in The Norton Anthology of Short Fiction and Charilie Chan is Dead II. She has received fellowships/awards from Harvard University, Guggenheim Foundation, National Endowment of the Arts, and others. “Literary Imagination and Living History” was adapted from her Honors Faculty Lecture on November 26, 2012, at the University of Massacshusetts, Amherst, where she teaches.

HILARY PLUM is the author of the novel They Dragged Them Through the Streets (FC2, 2013), from which “Oil Rises” is excerpted. She is an editor with Clockroot Books/Interlink Publishing and a consulting editor with the Kenyon Review. Recent fiction has appeared in Pleiades, Copper Nickel, LIT, and DIAGRAM.

ADAM SCHEFFLER grew up in Berkeley and received his MFA in poetry from the University of Iowa. He is currently a PhD candidate in English at Harvard where he is working on a dissertation about the role of other people in the poems of Gunn, O’Hara, Rich, and James Wright. His poetry has appeared in the Colorado Review, Conjunctions, The Cincinnati Review, The New Delta Review, The Baltimore Review, and The Harvard Advocate; it is forthcoming in The American Poetry Review and the Southwest Review.

CHRISTINE SNEED has published stories in two past issues of Massachusetts Review. Her second book, a novel titled Little Known Facts, was published by Bloomsbury earlier this year. Her first book, Portraits of a Few of the People I’ve Made Cry, won AWP’s Grace Paley Prize in 2009. She has published stories in Best American Short Stories, PEN/O. Henry Prize Stories, New England Review, Ploughshares, and a number of other journals.

MOLLY SPENCER's poetry has appeared or is forthcoming in CALYX, Cave Wall, Escape Into Life, Linebreak, and other journals. A native Michigander and erstwhile Minnesotan, she now lives in the San Francisco Bay area with her husband and their three children. She writes about poetry, the writing life, and parenthood at

PAVEL ŠRUT (1940) is an award-winning poet, essayist, writer and translator. He belongs to the generation of post-war Czech writers whose voices gained prominence in the flowering of Czechoslovakia’s Prague Spring, voices silenced in by censorship in the aftermath of the 1968 Soviet Invasion. Šrut earned the Jaroslav Seifert Award in 2000, for the compilation of his samizdat works, Paperback Poems (Brožované básn ), and his screenplay in verse, Evil Beloved (Zla milá). In 2012, Šrut was given the Karel apek Prize for his lifetime achievement in literature. He is also a celebrated writer of children’s literature. He is currently at work on the third and final volume of his beloved series, The Odd Sock Series.

CHRISTOPHER WATKINS’ debut volume of poems Short Houses With Wide Porches was published by Shady Lane Press in 2008. His new collection, The Waiting Room, is forthcoming in spring of 2013. Watkins has additional poems published or forthcoming in Redivider, Hayden’s Ferry Review, Slipstream, Euphony, Talking River, The Southampton Review, and more. He was Writer-In-Residence at The Kerouac House in Orlando, Florida, and is the recipient of a residency grant from The Vermont Studio Center. He received his MFA in Creative Writing-Poetry from The Stonecoast MFA Program at The University of Southern Maine.

YOOJIN GRACE WUERTZ was born in Seoul, South Korea and grew up in New Jersey. She is currently a MFA student at New York University.