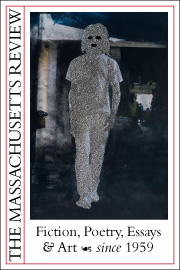 OVER THE SIX YEARS I’ve been working for this magazine, a single question has been put to me more than any other. What sort of work do you publish? Occasionally the query comes from folks without much sense of what it is that literary journals do, or what small magazines like ours have done to keep literature alive in this country. In that case, it’s easy: I just tell them that we publish poetry, fiction, and nonfiction, in roughly equal amounts. Sounds simple, anyway.

Yet hidden within any of these categories is a multiheaded beast, with its genealogy straight out of classical mythology. Take the last of these as example: Why should our essays, with their historical or public affairs focus, necessarily be grouped with stories that simply happen to have actually happened? Does the latter then belong with the fiction, as if all stories are just stories? Or do we publish four kinds of things, not three? And, for that matter, what’s with those counts? How do we figure our “roughly equal” amounts—do we count authors, or titles? Given that we publish mostly short poems, how might the quantity of poetry be said to equal the prose, when any page count of the latter will greatly exceed the former? And what about short shorts, what some call flash fiction? Simple is rarely simple. And nothing is simple when there’s something real at stake: the default definitions of what it is we’re reading, and why.

Most times, however, the question comes from someone with an evident investment in our answer, someone who ought to know something about literary magazines and their history—after all, they’ve already decided to throw their lot in with our mob. In such cases, the query is essentially this: Is the sort of thing you publish the sort of thing I write? Not the most precise of wordings, admittedly, but the aim here is to identify potentially overlapping sets; no one wants to hit a bull in the eye. For this familiar question, I hope to be forgiven recourse to a pat answer. We’re more interested in the world than the self, I often respond. This review began, five decades and six years ago, by quoting Ralph Waldo Emerson on the goals for his own literary review, begun over a century earlier. “This country needs to be extricated from its delirium,” Emerson commented, “A journal that would meet the real wants of this time must have a courage and power sufficient to solve the problems [of] the great groping society around us.” Over a century and a half later, we’ve become understandably less sanguine about finding solutions, yet that doesn’t mean we are any less committed to the effort. And we do believe that said solutions, wherever and whenever, will be found in the “inspired. . . inevitable utterance” of poetry and fiction and, yes, nonfiction : “to such”—as Emerson himself put it—“our journal is freely and solicitously open.”

That said, with our Fall issue of 2015, I now find myself with a new—and improved—answer to this question of what. You want to know what we publish? Read this issue. And, yes, that’s my final answer. Though one can get a strong sense of a magazine’s purview and aspirations from its special issues or special sections, such features are put together largely by soliciting the work of known quantities. Special issues are not chock-full of over-the-transom attractions like the number you now hold, actually or virtually, in your hands. Here you will find—as always—some names you’ll recognize and others you’ll learn to seek out. The vast majority, I assure you, came to us asking implicitly the same timid, curious, hopeful question that others voice explicitly.

This is our most fully reasoned response, so read on, from the first page to the last. Identify for yourself the family resemblances. The treasures a magazine stores up are found between the covers.

The True Chronicle of the House of Bego

The Very Idea of a Bridge

The Translational Life of Cities

With Knowledge of Fire

The Joints that Hold Us Together

From the Wind-Up Cathedral

Whose House, Whose Playroom

No Cocktails in Kabul

Trajectory to the Sun

I Am What I Was

Kindness, a poem by Francisco Urondo,
translated by Julia Leverone

Conversations in the Realm of the Dead,
a story by Maria Stepanova, translated by Sibelan Forrester

Refugee, a poem by Arseny Tarkovsky,
translated by Philip Metres and Dmitri Psurtsev

(untitled), a poem by Aigerim Tazhi, translated by J. Kates

Not All There, a story by Eric Henry Sanders

The True Chronicle of the House of Bego, a story by Elvis Bego

The Very Idea of a Bridge, a poem by Mira Rosenthal

from The Books of Jacob, a story by Olga Tokarczuk,
translated by Jennifer Croft

The Translational Life of Cities, an essay by Sherry Simon

With Knowledge of Fire and Medea, poems by Corey Thrasher

Notes for Angela, excerpt from In Your Name
by Mauro Covacich, translated by Christopher Tamigi

Fatih Akin's Cinema of Hospitality, an essay by Donald Weber

Pina, a poem by Benjamin Landry

Birds and War, a story by John Nelson

The Sheep Farmer Transmutes, a poem by Rachel Rinehart

The Joints That Hold Us Together, a story by Annie Lampman

From the Wind-Up Cathedral, a poem by Sarah Ann Winn

God's Decree to Marc Concerning Why the Dusty Rose Bedroom
Walls Make Him Uneasy, a poem by Marc Tretin

Whose House, Whose Playroom, a poem by Virginia Smith Rice

No Cocktails in Kabul, a story byRobin Fasano

Hamas Commander in Brown Shoes, a story by Rivkie Fried

Trajectory to the Sun, a poem by Joanne Dominique Dwyer

I Am What I Was, a story by Ken Hanes

On Weather, an essay by DeWitt Henry

Prayer, a poem by Bonita Penn