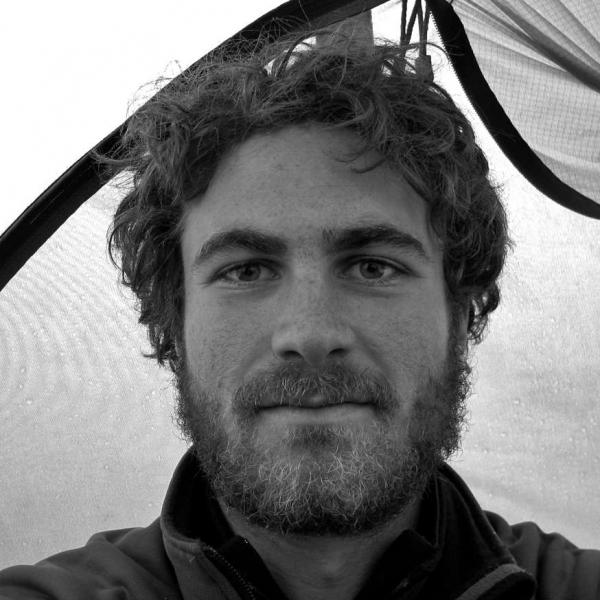 "Rhythm is the seed, the little
body we planted in fear of

the dark that rose to adorn
and outlive us. It crawled…"

I was fortunate to have two teachers in middle school—their names were Mrs. Strom and Ms. Rambo—who encouraged me to try my hand at making poems. The first poem I remember finishing was for an assignment in eighth grade, a mock-epic (I realize in retrospect) full of images from middle-of-the-night pyromanaical exploits with my friends on the streets of Paris, Texas. During the culmination of this assignment, which was a class reading, I realized that all my friends had written awful poems, no attention to language, no excitement. So with that first poem came something like a change of standards. I started to spend more time with the musicians in the room who had written poems that seemed to do something; it struck me as a revelation that people my age could make art that moved me. That year I quit football, took up the guitar, and started filling a spiral notebook with songs.

I always keep poets in my rotation whose style I won’t be tempted to imitate unconsciously—that is, I try to read in such a way as to temper contemporary voices with old ones. I guess this began when I was a kid in church listening to the Old Testament, the Psalms and the prophets. I noticed that in these scriptures Yahweh almost always speaks in verse: there was something powerful there, maybe not even in the words themselves but in their form, in those rhythms and parallelisms. Later, in high school, the little group of readers and musicians I ran with passed around books by Eliot, Dickinson, Whitman, Rilke, Langston Hughes, Frost, Plath, Rumi, Blake, cummings—not for class, mostly, and often we felt like we’d discovered these writers. I suspect these early influences on my work are still the strongest, the foundation that everything else rises from.

I began my formal study of poetry in college, not at first in English but Latin; I translated Catullus, Lucretius, and large parts of Virgil’s Georgics. These Roman authors challenged my understanding of what poetry can do: there was something fresh and even modern in the notion that a poem could be simultaneously lyrical, political, didactic, self-referential, and even transgressive. I didn’t begin reading contemporary poets until late in college, but I immediately fell under the spell of many of the poets that I discovered in my coursework: Charles Wright’s hermetic spells with their mastery of image and line, Louise Glück’s oracular voice and sweeping use of persona, Robert Pinsky’s insistence on mind and music, the pathos of the body in Jack Gilbert, the aesthetic precision of Jorie Graham, and the meditative, often prophetic vision of Wendell Berry. I aspire to all of this. Recently I’ve been deeply into the work (through teaching it) of Terrance Hayes, Mary Oliver, Anna Swir, Edwardo Corral, and Bob Hicok.

I lived and worked in Waco, Texas, for several years after college. I don’t know if you’d call these professions, but during this time I recorded a few records and toured with an indie rock band, managed a branch of the (now defunct) nonprofit organization ACORN, worked at a chain bookstore, ran sound for a music venue, and served for almost two years as a live-in volunteer on a community farm. I’ve taught college composition and creative writing since I finished my MFA, though I had a three-year stint in administration as director of a community college honors program. We’ll see what’s next.

A few years ago I attended an honors conference in Lincoln, Nebraska, and happened upon a book of Annie Dillard’s “found poems” at a used bookstore. Through the weekend I kept returning to ideas of appropriation and recycling of art and language, and then one night I ended up at a downtown venue where a local rock band was playing covers. Walter Pater said that “All art aspires to the condition of music,” and of course he’s right: the rhythm, the heartbeat, is the seed, and everything—sex, language, art, everything from the turning of a line to the turning of the planets—is just a borrowing, or a rediscovery, of some original beat. “Found Music” was quick, and organically associative: I “found” a series of musical images floating around in my head as I meditated on all these thoughts, and I put the poem down in its first draft on the little notepad next to the hotel bed.

I’ve found it’s often the absence of a place that starts a poem. I got an early lesson in the primacy of place in determining vision and the formation of value: I spent my early years in D.C., and suddenly, when I was about nine, we moved to a cattle ranch in Paris, Texas. This took a bit of adjusting to. Since then I’ve moved back and forth between the rural south and the urban north. When living on farms in central Texas, I found myself writing poems full of urban imagery—snow shovels, parks, storefronts, and art installations. When I was in grad school in Boston, my poems insisted on finding their impetus in hunting, milking goats, shooting skeet, harvesting honey. I guess I don’t know where I belong—the country or the city—but I sense that placelessness has become a national, and not merely a personal, identity crisis. At any rate, this tension of place has been vocally productive in my work.

Is there any specific music that aids you through the writing or editing process?

Anything instrumental—I can’t write or read with lyrics on. Lately I’ve been editing poems to a rotation of albums by Bing & Ruth, Tinariwen, Explosions in the Sky, Mahler, Tortoise, and The Bad Plus.

I don’t, though often lines will come to me during or after physical activity. Running usually does the trick, and I’ve also sketched out a number of my poems during extended backpacking or skiing trips.

My partner Karen. She knows my voice and always points me back to it.

I’ve always wanted to experience playing an instrument in an orchestra, contributing a small voice to a massive composition—the cello would be my choice. Printmaking also fascinates me; I once collaborated with a printmaker who could essentially think in white space, effortlessly transferring an image from his head into negative relief on linoleum.

I just finished Ernest Cline’s Ready Player One, and now I’m on to Margaret Atwood’s The Blind Assassin. During the holiday I’m also working my way through Erich Auerbach’s Mimesis and revisiting Miriam Bird Greenberg’s wonderful chapbook All night in the new country.

T. J. McLemore lives in Fort Worth, TX, where he teaches at Texas Christian University. He is the winner of the 2016 Richard Peterson Poetry Prize, and his poems have recently appeared or are forthcoming in “Prairie Schooner, Crazyhorse, Crab Orchard Review, Greensboro Review, and others.