On July 14 and 15 of 2017, I taught a class of between twenty-seven and thirty-two high school students at UCLA, as part of the University’s Early Academic Outreach Program. There was certainly an exact number of kids in the room, but I was never certain what that number was. The teenagers, teaching assistants, and I all tried counting early Friday morning and got different tallies, because counting youngsters is dicey. They squirm, shift, get up and move while you’re counting. We decided the number was right around thirty students, mostly of color, all on summer vacation between their sophomore and junior year of high school, recruited to get a taste of the good life at UCLA.

The theme of our course was “What do teenagers need to know about the global refugee crisis?” We followed an introductory curriculum from Facing History and Ourselves, then sailed off into the essay “At Sea, Devoured by Our Indifference” by Igiaba Scego, which has haunted me ever since I first read it on the Massachusetts Review blog.

The academic reflex I wanted these kids to pick up is called QAQAQ, which stands for Question-Answer-Question-Answer-Question.  It’s pronounced “quack-quack,” like a duck. This structure offers an alternative to the convenient but shallow “question + answer = done” approach. QAQAQ invites students to do research as a continuous loop, perpetually recharged by curiosity about that fresh, home-grown, tantalizingly dangling third question.

Counting came up again later when a student asked exactly how many refugees there are in the world. A record-high number since the end of World War II: we all knew that from the Facing History & Ourselves curriculum. About sixty-five million in 2016, according to the United Nations Refugee Agency. When it's such a challenge for us to count kids in a classroom, imagine how hard it must be to count all those refugees fleeing for their lives.

We started trying to make refugees count by practicing QAQAQ on the dependably compelling question, “What’s your favorite flavor of ice cream?” Sustained inquiry into cookie dough and butterscotch ripple spoke scoops about us as individuals. Next, we watched former United Nations ambassador Samantha Power discuss meeting a young Syrian refugee who wanted nothing more than to finish his last year of high school.  QAQAQ-ing her presentation led us to Third Q’s such as:

What are the conditions refugees have to live in?

What are some ways we can help?

Who are the people causing the refugees to live this way?

When I asked the students to investigate these Third Q’s by whipping out their phones, I discovered they had an imperfect grasp of QAQAQ. They were skipping from topic to topic, asking back-to-back Q&A’s rather than developing a recursive sequence around a single topic. This was good, I told them. It shows that what we’re doing requires learning. The approach here is not sampling three different ice cream flavors but getting your scooping elbow deep into the bucket of the one flavor you really want to dig into.  I gave them a second chance, which millennial teens love, as they demonstrated by this time producing well-formed QAQAQs:

Q: What organizations help refugees?
A: UNICEF, International Rescue Committee, Save the Children, and Doctors Without Borders.

Q: How do they help?
A: They get donations and use them to assist refugees with shelter, food, clothing, and medical aid.Q: How do I contact them?

Q: What keeps the refugee problem from being solved?
A: People refuse to see how bad the problem is and think it will go away eventually.

Q: Why do people not want to help?
A: Countries don’t go out of their way to help people who don’t originate within their borders.

For further insight we turned to the personable, allusive, and deeply alarming essay, “At Sea, Devoured by Our Indifference.” We looked at Igiaba Scego’s Wikipedia page, so we could see that she’s an Italian writer of Somali descent, and potentially be motivated by the fact that she is alive and writing today, just like we are. I asked students to annotate the essay by marking anything they wanted to clarify or talk about. To be democratic about the fact that there were thirty-or-so of them and only one of me, we discussed their issues first. One student noted how Scego said she felt like a murderer because her government wasn’t helping refugees. “We’re basically killing them if we don’t help them,” this student said.

Having arrived at a similar conclusion upon my own several previous readings, I had preselected about a dozen terms for each of six sections of the essay, so students would QAQAQ the scope of Scego’s geographical and historical references: from oil rigs in Libya to the Berlin Wall to the Dirty War in Argentina. By now they were QAQAQ-ing with alacrity.

I had them transcribe their inquiries onto grids they could make into cubes, through the teen-enchanting processes of cutting, folding, and using tape or glue. Making a cube would let students process their dutiful notes into a handy, little-bit-different, perhaps more memorable, and easy-to-talk-about artifact. Early finishers made a giant map of the essay on the floor out in the hallway, bringing out-of-sight/out-of-mind places such as Mogudishu, Tripoli, and the treacherous Strait of Sicily into our own sunshine-y UCLA world. 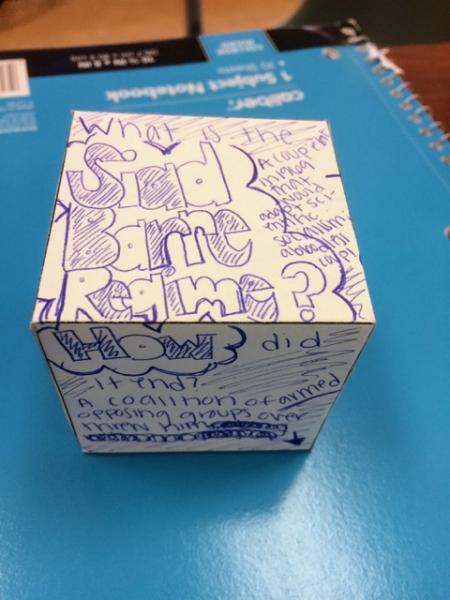 We then walked the zig-zag structure of the essay. There was a buzz of young people speaking their minds all around the map of refugee geography, sharing the findings and new questions we’d compressed into our cubes.

How did Igiaba Scego feel during the time she was a kid, growing up and getting older?  Did she feel responsible, scared, confused, etc.

Why is it that many countries think highly of themselves due to their social status and not on their efforts to help others?

What would a world that isn’t devoured by indifference look like?

Will society change before we all wind up like refugees?

Homework in their weekend dorms was to write a more-than-two-page essay about what teens need to know about the global refugee crisis, and why. The consensus was that teens need to know the global refugee crisis is happening, what causes it, and what to do about it. Overall, I feel buoyed by this rising generation’s compassion and disposition towards action.

And I’m especially optimistic about the student who raised her hand the next morning to ask, “Can we quack-quack-quack?”

MARK GOZONSKY lives with his wife in Los Angeles, where he teaches English at a public, arts-themed high school downtown. A UCLA Writing Project Fellow with an MFA in creative writing from Antioch University, LA, his. publications include fiction in The Santa Monica Review and essays about urban bicycling in Sports Illustrated online. Selected writing and classroom artifacts, including the Los Angeles Museum of Ohio, can be explored via markgozonsky.com.