You must go to Brno to see the rain. There are writers who have written almost exclusively about Brno and almost exclusively about what it's like when it rains there. Brno in the rain is a sadder place than anywhere else in the world, but in a less personally inflected way: the Brno rain washes sadness clean of all private elements, of all despondency and dejection, until it is nothing but immaculate, essential sadness.
—from "The Rain of Brno: Ivan Blatný and the Moravian Portuguese Poet," by Karl-Markus Gauss, Translated by Tess Lewis, Volume 61, Issue 2 (Summer 2020)

Tell us about one of the first pieces you translated.
The first book I translated was Peter Handke’s Once Again for Thucydides, an exquisitely poetic work of intense observation. In this collection of seventeen ‘epopees’ or ‘mini-epics’, Handke explores, through an almost religiously devoted act of attention, the numinous core of mundane phenomena: flashes of sheet lightning, a shoeshine man plying his trade, a crocus poking through the snow. It was one of the most challenging things I’ve had to translate and one of the most enjoyable. Sadly, I find Handke’s pronouncements on Serbia and Milosevic so deeply problematic, however well-intentioned he claims them to be, that I have not had the heart or the stomach to read his more recent works.

What writer(s) or works have influenced the way you write now?
The writers who gave me the feeling that horizons are being exploded, the ones who take literary convention and turn it inside out: Borges, Calvino, Flann O’Brien, Maggie Nelson, Claudia Rankine etc. I also love the great ranters who wring all sorts of expressiveness out of the monologue like Thomas Bernhard, Céline, and Mártin Ó Cadhain.

What other professions have you worked in?
I’ve worked as a lifeguard, a waitress, and an editor in a small publishing house. I’ve been a freelancer for decades now but I still serve (with joy) as an Advisory Editor to the literary quarterly The Hudson Review.

What did you want to be when you were young?
I grew up dreaming of being an editor but as much as I enjoyed it, I find writing and translating to be more exciting—and more excruciating.

What drew you to write a translation of this piece in particular?
I’ve been following Karl-Markus Gauß’s work for years and with the current rise of nationalism around the world, it seemed to me his writing was more urgent than ever. He has spent decades mapping the peripheries of Europe as well as its center and giving voice to many ethnic minorities who have been all but silenced by the dominant cultures of their geographic regions. The essays in In The Forest of the Metropoles are deeply and creatively engaged with themes that are as relevant to readers in the US as to readers in continental Europe: tolerance and integration of minority communities, the burden of history and the after effects of conflict on survivors and future generations, the ways language can enforce borders within and between countries as well as overcome them.

This all sounds very weighty and serious, but as a narrator Gauß treads lightly and is excellent company. 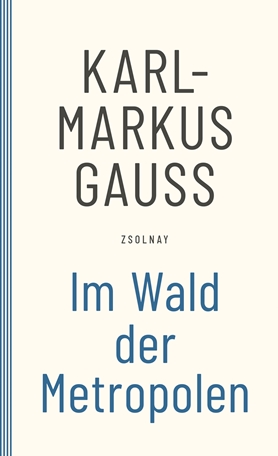 Is there a city or place, real or imagined, that influences your writing?
Vienna, forever and always, particularly my idea of it under the Hapsburg Empire with its richness of the arts, the music, its idolatry of musicians, artists, and writers, its vast array of languages and dialects, its ingenious and supremely caustic critics. I could go on and on…

Is there any specific music that aids you through the writing or editing process?
I rarely listen to music when I’m translating, writing or editing because I tend to get too caught up in the melody or a particular passage and lose the thread of what I’m working on. However, I recently discovered the perfect background noise for writing—birdsong. With traffic down, airplanes all but grounded, and construction more or less on hold, there has been a symphony of bird calls outside my window every morning and evening. I bought several bird feeders and they are filled with songbirds and blue-jays all day long.

Do you have any rituals or traditions that you do in order to write?
I read and read and read: all sorts of works that have any connection, however tenuous, to the work at hand. I make piles of books with a similar style or narrative perspective, from the same time period or region, with similar narrative voice or structure, sentence length or number of pages, any excuse will do. Sometimes I’ll just make up a connection. It’s my only opportunity at the moment to read without feeling guilty. Finally, after indulging as much ‘research’ (procrastination) as I can manage before the deadline starts glowering at me, I sit down and get to work.

What are you working on currently?
I am still finishing Karl-Markus Gauß’s essay collection In the Forest of the Metropoles, from which this piece was excerpted.

TESS LEWIS is a writer and translator from French and German. Her translations include works by Walter Benjamin, H.M. Enzensberger, Christine Angot, Philippe Jaccottet, and Peter Handke. Her recent awards include the 2017 PEN Translation Prize for Maja Haderlap’s Angel of Oblivion and a Guggenheim Fellowship. She is an Advisory Editor for The Hudson Review.