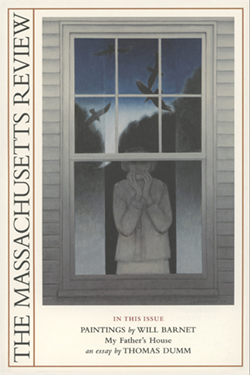 The Strange Genius of American Men

Person from a War-Ravaged Land

Will Barnet's Series of Paintings "My Father's House"

The Kid with the Ponytail

Write My Father from Ukraine

This One Isn't Going to Be Afraid

Traffic of Our Stage: Godot Returns to Broadway

To Market and Back

The Book of Tobin

Introduction by The Editors

What Is Mine and O Mother, O Father,
poems by Hayan Charara

Of Phantom Nations, an essay by Jim Hicks

The Strange Genius of American Men,
a story by Jung H. Yun

A Better Life, a story by Michael Maschio

Person from a War-Ravaged Land,
a story by Coralie del Roble Duchesne

On the Diffculty of Distinguishing between
the Buildings Used to Keep the Foodstuffs and Those
Associated with the Dead, an essay by Scott Henkle

The Duplications, a poem by Nicolas Hundley

Jocelyn, a story by Andrew Coburn

The White Heart Bar, a story by Sara Majka

Before, a poem by Khaled Mattawa

Will Barnet, "My Father's House,"
paintings by Will Barnet

Will Barnet's Series of Paintings "My Father's House,"
an essay by Thomas Dumm

The Oxbow, a story by Brion Dulac

Stream-Entering, a poem by Alicia Ostriker

The Kid with the Ponytail,
a story by Paul Kaidy Barrows

Plots, a story by Frances Greathead

Write My Father from Ukraine,
a poem by Jeffrey Perkins

Crow, a poem by Joy Manesiotis

This One Isn't Going to Be Afraid,
a story by Melinda Moustakis

Traffic of Our Stage: Godot Returns to Broadway,
an essay by Normand Berlin

To Market and Back, a poem by F. Daniel Rzicznek

The Book of Tobin, a story by Eric Thomas

My Ophelia, a poem by Miguel Murphy

victory, a poem by Sonia Greenfield

Alphabet of Snow, a poem by Norman Lock