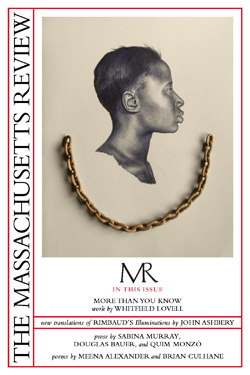 "HEAVE THE LOG!" Though the origins of the final word are obscure, the history of the command is not. "Log" in this sense came into the languae just when Hawkyns, Ralegh, and that whole motley herd were reading Hakluyt, dreaming of treasure, and trafficking in lives. From the ship's stern, a seaman would throw the logge into the sea—a line tied to one end, weights fastened to the other. A second sailor would unreel the rope—its length marked by knots at every seven fathoms—as the ship sped away. When a sandglass emptied, the reel was stopped, the logg-line retrieved, and the knots summed up. Knots, a nautical measure of speed. William Falconer's Universal Dictionary of the Marine (1780) notes, "It is usual to heave the log once every hour in ships of war."

From the early modern period, when the gods first fled and the world was forever disenchanted, our poets have done no less. What is it to write, if not to cast one's mark into the heaving oceanic tumult? Taking one's measure from there, as if the globe didn't spin, didn't turn on its wheel, as if the universe itself weren't fleeing from us, in every possible direction. Unlike the warship, however, the poet gives us the universe, not just our relative location in it. Just so, in this issue, we begin with a panoply of traveloues: Amy Leach's glorious jaunt into hebephrenic menagerie, Sabina Murray's wormhole in Wanderjahren, the resurrected rage of Aimé Césaire, Quim Monzó shooting Swiss legend full of holes, the cool calculations of Mike Freeman. But who are we to play favorites? Yours is the only logbook that matters.

Whichever turns are taken, the artistry of Whitfield Lovell will undoubtedly stun you in your tracks. MR is proud to welcome these bold beautiful black faces into our pages; for us, Lovell's invitation to personal, familial, and historical meditation is also a reminder of our own history as a publication, and a call for reengagement in the movement today. We are equally proud of Kevin Quashie's invitation to you to pause, to linger on these intricate compostions. Lovell's pairings of faces and found objects are visualized metaphor, meant to carry us beyond our received ideas.

If we can't change, we're already dead. And yet, on beyond the blinkered immortality of adolescence, we confront—too soon, always too soon—the one frontier marked with a one-way sign. All the more wondrous, then, the poet who dares chop her axe into that frozen sea. And here we must mention Meena Alexander's salute to Agha Shahid Ali, Pravinsinh Chavda's deciphering of ritual in "Lines on the Wall," and, most certainly, the inspiring "Tenacity" of Douglas Bauer. Spring, in New England at least, is the shortest of seasons, and winter the longest.

One final form of apartheid is addressed as this issue comes to its clsoe. Neither existential nor racial, the "two cultures" divide—between the sciences and the arts—dates from the same era that brough English pirates to African and American shores. Today, we hear a great deal of chatter about ramping up USian educaiton in math, in the sciences. Let's not question, for the moment, the wisdom—in this "Sputnik moment"— of encouraging cold warrior enthusiasm in the name of better pedagogy. Let us say only that MR will not hesitate to stand up for the humanities, or for humanity. The single and singular point which this first number of our fifty-second year best illustrates is that, in today's world, poetry is the one true religion, in the oldest, etymological sense of the word (either re-legere "to read, again and again," or, more likely, re-legāre, "to tie again, to bind together"). Those other pretenders, divided against themselves, will not stand.

It is no chance occurrence that each contributor to our technoscience bloc binds science and art together, bridging the Great Divide. Nor should it surprise that these authors write in three different languaes, represent five different countries, and work in a still greater number of fields (including biochemistry, computer science, graphic art, history, and human rights). One is even Parisian, an alum of that Univesity which, back in the early thirteenth century, may have started it all.

So of course we're interested in the Poe-to-Powers arc of science writing. It shouldn't be forgotten, after all, that the Massachusetts Review is a Five College production. Since 1959, it had been the business of these editors to bring the disciplines together, to offer a speaker's corner, and to write for readers who are interested in simply everything. It is true that the very idea of ūniversitās smacks of hubris. Yet the defiant cast of one's mark, the spinning of a reel that takes our measure, may also be a beautiful thing. It may even be a poem. Nothing better, then, to close this issue than Ashbery's sparkling translation of Rimbaud's Illuminations. A landmark.

The Nubian Vultures Have the Floor

The Nubian Vultures Have the Floor

By Clayton Eshelman A. James Arnold

By Clayton Eshelman A. James Arnold

At the Checkpoint to Sleep

More Than You Know

More Than You Know: The Quiet Art of Whitfield Lovell

Lines on the Wall

Lines on the Wall

En Route to Bangladesh, Another Crisis of Faith

The Song of the Railroad Crossing Barrier

The Song of the Railroad Crossing Barrier

Tesla, Portrait Among the Masks

Tesla, Portrait Among the Masks

The Safari, an essay by Amy Leach

The Nubian Vultures Have the Floor,
a poem by Aimé Césaire,
translated by A. James Arnold and Clayton Eshleman

Howling, a poem by Aimé Césaire,
translated by A. James Arnold and Clayton Eshleman

Periplus, a story by Sabina Murray

At the Checkpoint to Sleep, a poem by Henk Rossouw
Cowboy, a story by Kim Chinquee

Resuming the Count, an essay by Mike Freeman

Mourning I, a poem by Bruce Snider

Something Flown, a poem by Patty Crane

More Than You Know, artwork by Whitfield Lovell
with essay by Kevin Quashie

You, A Shadow, a poem by Heather Madden

On Indian Road, a poem by Meena Alexander

Lines on the Wall, a story by Pravinsinh Chavda,
translated by Mira Desai

En Route to Bangladesh, Another Crisis of Faith,
a poem by Tarfia Faizullah

Tenacity, an essay by Douglas Bauer

A Final Brooklyn, a story by Brion Dulac

Thifting, a poem by Angela Sorby

The Song of the Railroad Crossing Barrier,
a story by Otar Dovzhenko,
translated by Patrick Corness

Tesla, Portrait Among the Masks,
a novel excerpt by Vladimir Pištalo,
translated by Ellen Elias-Bursac

Report from Computerville:
Virtual Walkabouts and Master Narratives,
an essay by Larry Owens and Dominique

Mistaken, a poem by Charlotte Boulay